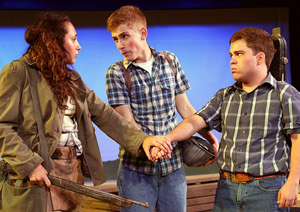 I was intrigued by the flyer describing “The Burnt Part Boys” — getting its West Coast premiere from L.A.’s Third Street Theatre and West Coast Ensemble Theatre — as “a coming-of-age musical set in a West Virginia mining town with a soaring Appalachian-inspired score.” I immediately started thinking of “O Brother, Where Art Thou?” and imagined bluegrass, dulcimers, banjos, Flatt & Scruggs, Doc Watson and all those other back country, old-timey performers. Well, I should have known to read between the hyphenated lines “Appalachian-inspired.” “The Burnt Part Boys” is actually a traditional theatrical musical with music, lyric and book credits. And it’s a 90-minute intermission-less ode to dead dads. But don’t let that scare you off. The play has some pleasures to be distilled.

First, though, a word about the music. Four live musicians play, and, granted, there is a guitar and fiddle in the mix, but it was a thin disguise for what was really a “Broadway”-style musical. Off-Broadway, to be more exact, since that is where the play had its maiden run in 2010. Most of the songs (by musical theater songwriting duo Chris Miller and Nathan Tysen) were piano-based and reminded me of songs you might hear in “Glee” or “Rent” — what I call the “Hey kids, let’s put on a show!” variety of music. It reminded me of a routine I saw on “Late Night With Jimmy Fallon” where he and singer Ariane Grande performed nasty rap hits transmogrified into Broadway show tunes. Not the most authentic treatment, given the original inspiration. To be fair, there is a country waltz and a backwoods stomp, and a yodel here and there, but these are the exceptions.

The able singing is what gives this music its life, and the cast of eight males and one female means that most of the songs are sung by one or more men. The harmonies rely frequently on prolonged major third and major fifth intervals, evincing a generally positive and uplifting feel. With the spare musical accompaniment, it almost feels a cappella at times, which works fine because all the voices are strong and in key. I particularly liked Dusty (played by the puckish Adam Dingeman) singing his self-deprecating song “Marshmallow Me.”

The more interesting aspect of “The Burnt Part Boys” is contained in the so-called “book” (i.e., the story, spoken words and dramatic structure) by Mariana Elder. The play opens in darkness as four miners appear with headlights on their helmets, singing as they work in the mine. After a cacophony, we understand that a cave-in occurred that trapped and ultimately entombed these men. Ten years later and it is 1962, and what were the young children of these miners are now teens and it is obvious that the tragedy still weighs heavily upon them. The news that the Company plans to reopen the mine spurs 14-year-old Pete into action, and he vows to do whatever it takes to safeguard the tomb of his father. The majority of the play involves the arduous trek up the mountain by Pete (Daniel David Stewart), his friend Dusty and a girl (Lauren Patten) they pick up along the way who also lost her father to the mine. They are pursued by Pete’s older brother Jake (Aaron Scheff) and his friend Chet.

This odyssey to both preserve and recover the past lends a nice momentum to the goings on and keeps the play from flagging. Director Richard Israel has coached his actors to impart a palpable physicality to the harrowing ascent, which makes it all the more real. But there is fantasy too: along the way, we meet characters from Pete’s imagination — Sam Houston, Davy Crockett and Jim Bowie, all played by Matt Musgrove, who is also Pete’s dead father. It becomes a poignant realization that Pete is seeking not only to protect his father’s memory, but to figure out who his Dad really was, and what Dad might say to him now, if he could speak.

The climax, after they finally reach the mine, has some genuine drama and provides a satisfying emotional closure for Pete, Jake and Frances. Once we figure out who is really saving whose life, we are left with thoughts about memory, longing, friendship and the possibility of surpassing expectations — your own and others’. For anyone who has lost a father too young, this is probably going to be an emotionally powerful experience. For everyone else, it’s a stirring exercise in nostalgia and redemption that is worth the trek to West Hollywood.