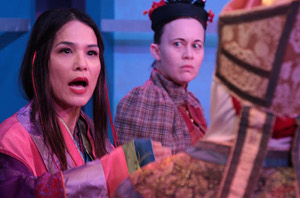 What is Classic? The folks at Antaeus normally present theater that everyone understands as classical — Corneille, Chekhov, Miller, etc. However, this season, they are pushing the boundaries of that term. With “Top Girls,” written by British playwright Caryl Churchill in 1982, we are thrust back into the era of Princess Di, Boy George and Maggie Thatcher. Cue the giant shoulder pads.

Churchill is known for her experiments in surrealist and postmodern theater, and “Top Girls” is no exception. Certain clues, like the characters talking over each other all at once, reveal some of the techniques of this type of theater. But the more interesting observation is what the play concerns itself with. In Thatcher-era England, as in America, women were really still in the first stages of integrating en masse into all levels of the workforce. The play investigates not only how women are forced to operate within the established patriarchy, but also the fundamental relationship of feminism to capitalism. While feminist concerns have since moved on, it is interesting to be reminded what the important questions were for women just a generation ago.

The play’s first act wades deep into surrealist territory, and most viewers will find they have fallen down the proverbial rabbit hole into a world that makes little sense. We see a confident, stylish career woman, Marlene, setting up for a dinner party at a restaurant. As her guests arrive, we notice that they are dressed very eccentrically. Are we seeing some subset of British ’80s style, we wonder? As the characters speak about their lives, we begin to get a glimmer that these are not real people, but ghosts of a sort, people from the past, and their costumes reflect their widely varying origins. For example, a woman dressed in chasuble and miter hat speaks (in modern dialect) of being stoned to death when people found out she was impersonating a pope.

Only the incredibly erudite would recognize even one of these characters as notable women from long ago. There is Isabelle Bird (a 19th-century British naturalist/traveler), Lady Nijo (a concubine of a 13th-century Japanese emperor), Dull Gret (harrower of hell in Flemish legend, featured in a Bruegel painting), Griselda (the patient wife from Chaucer’s “Clerk’s Tale”) and the aforementioned Pope Joan, a medieval mythical female papal imposter.

Needless to say, with these women talking over each other and alluding cryptically to their backgrounds, the first half is very confusing. And it wasn’t just me. Nobody in the audience seemed to be able to make heads or tails of it. Luckily, director Cameron Watson begins to tie the threads together in the second half; the action picks up steam and the play becomes more involving as the narrative begins to make more sense. All the scenes in Act II take place either within the Top Girls employment agency, or at the house of the sister and niece of the “Top Girl,” Marlene.

As the drama develops, we see an interesting opposition developing between go-getter Marlene and her dour stay-at-home sister, Joy. These two polar opposites can be seen as symbolic of the cultural crosscurrents at work in the England of the day. Marlene evidently represents Thatcher’s Conservative party ethos: she’s all about hard work, money and material success, but lacking warmth, sympathy and caring. Joy is Labour party all the way: angry at the world’s injustices, but unwilling or unable to make a better life for herself, preferring to take the dole and manage as best she can. It is to Churchill’s credit that she doesn’t push us to accept one as better than the other: they both have their faults.

Despite the struggles of comprehension in the first act, you can rely on the fine acting to carry you along. Each of the seven (all female) actors plays two or more roles that call for completely different personae. That they pull it off and manage to successfully inhabit these vastly different characters is a credit to their professionalism. As always at Antaeus, there are two complete and different casts, and which cast you will see depends on the performance. Luckily, at Antaeus, the quality of actors seems to be uniformly high, so either cast ought to be fine.

Even though the playwright seems too clever for her own good at times, the questions she raises and their applicability to the times in which she wrote this play are more than just valid, they are sharpened to a fine point. Go see Antaeus’ “Top Girls” for the memorable characters, the strong acting and the nostalgic blast from our big-shouldered past.