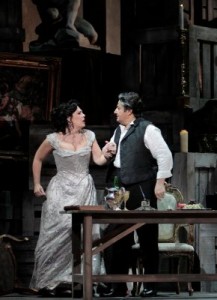 Sometimes the simplest recipes yield the most delicious results. In Giacomo Puccini’s Tosca we have love, lust and murder — a torrid triumvirate of terms cooked up by the marketing department at LA Opera. Yet it describes quite succinctly the dramatic feast that viewers are in for. Just add music and stir.

Puccini based his 1900 opera on an 1887 play of the same name by French dramatist Victorien Sardou. It was his first attempt to write in the so-called verismo style that sought to portray real life unflinchingly and without idealism. It took him four years to write, but the lush orchestration and dramatic force of its characters made it an immediate hit with the public, a popularity that has endured for over a century.

The play and the opera as originally envisioned are set in Rome in 1800, a time of turmoil just as Napoleon’s forces are mounting their decisive offensives in Italy. For reasons difficult to fathom, British director John Caird has chosen to set the opera 100 years later, in 1900, a time of relative peace in Europe. Putting that aside, we are still left with the explosive dynamics of what is essentially a love triangle, pitting the merciless Chief of Police Baron Scarpia (played by Lado Ateneli) against the artist and Republican sympathizer Cavaradossi (Marco Berti) and his lover Tosca (Sondra Radvanovsky). The resulting fireworks provide ample material for creative expression, and here Caird, celebrated for his original London blockbuster stagings of Nicholas Nickleby and Les Miserables, does not disappoint. For example, each act begins in a similar showy fashion, with a character ripping down a bloody scrim, revealing the set behind.

The scenery by Bunny Christie uses a unit set that does triple duty for each of the three acts, which take place respectively in a church, a palace and a prison. Thankfully, the sets are quite intricate and reward the appraising eye with many details. The framing device is a three-walled “stone” chamber with receding clerestory windows and an exaggerated deep perspective. As a church it is glowing with a multitude of lit tapers interspersed with looming statues of Jesus, the Madonna and a large painting-in-progress of Mary Magdalene surrounded by scaffolding. In Act Two, Scarpia’s palatial office has been interpreted as a storeroom filled with wooden crates from which marble statues emerge like prisoners yearning to escape, but not quite succeeding. This profusion is pared down in Act Three to an effective minimalist setting for the prison at Castel Sant’Angelo, a grim space made all the grimmer once you notice the dimly lit bodies hanging from nooses near the ceiling.

American soprano Radvanovsky, a specialist in 19th-century Italian repertoire, was a good choice to play Tosca. She can act and has a distinctive and strong voice. Regrettably, she was recovering from illness on the night I attended and was holding back somewhat. On the few occasions when she did let loose, her voice easily filled the hall. Her signature aria at the end of Act Two, Vissi D’Arte, had her crouched on the floor singing pitifully to a small statue of the Madonna; the effect was heartbreaking.

Marco Berti, on the other hand, had no problem showing off his powerhouse tenor, noteworthy for its strength and clarity. If one wanted to quibble, it might be that his prodigious physical rotundity seemed slightly at odds with his leading man/heartthrob status. Joshua Bloom’s Angelotti also made a good impression with his stalwart and marmoreal baritone.  The large choir, singing onstage in Act One and hauntingly from offstage in Act Two, helped to elevate the solemnity and grandeur of the proceedings.

Above all in Tosca is the superb music. Puccini’s score ricochets between extremes, ranging from light and lyrical when expressing the lovers’ rapture, to dark and dramatic when underpinning the two suicides, a murder and an execution.  For this production, maestro Plácido Domingo is the conductor, and he does a wonderful job balancing the ethereal play of the flutes in the lighter songs with the grunting lower registers of the trombones and tuba in the dramatic crescendi. The beauty of the songs and the rich sound ends up being the perfect antidote for what would be an otherwise grisly affair. So don’t let a little blood dissuade you from seeing one of this season’s highlight operas.