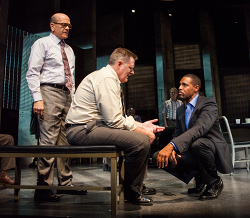 Sheldon Epps, the Pasadena Playhouse’s artistic director and director of the striking classic drama “Twelve Angry Men,” adds color to Reginald Rose’s already volatile (and smartly written) mix. A strong, talented cast of six white and six black actors essay the roles of the 12 jurors in a murder trial set in the 1950s, or possibly in current times. Stephanie Kerley Schwartz’s costume and stylistic scenic designs tend to favor the current era as opposed to the ’50s. In fact, nothing design-specific points to the 1950s.

Exaggerated accents, explosive tempers, clownish behaviors and witty quips keep the experience in the jury room far from boring. Characters range from a meek, young black man to a working-class white racist and everyone in between. Like peeling off layers of an onion, the personalities amongst this motley group of “a jury of your peers” slowly reveal the reasoning, sometimes deeply buried reasoning, behind their initial verdicts of “guilty” or “not guilty.” But given the intensity and urgency built into Rose’s script, the opportunity for all 12 actors to portray three-dimensional characters proves unworkable. Curiously, all six of the black actors seem to come off more sympathetic and sometimes more quirky than their white counterparts.

None of the individuals have names, being addressed only as “Juror Two” or “Juror 12.” The gifted cast, in order of their juror numbers, includes Scott Lowell, Jeff Williams, Gregory North, Robert Picardo, Jacques C. Smith, Ellis E. Williams, Barry Pearl, Jason George, Adolphus Ward, Bradford Tatum, Clinton Derricks-Carroll and Adam J. Smith. Equal time to shine does not occur for all. As in everyday situations, the loudest dominate. In this jury room, George and North have stake in this claim, with Tatum a very close third. North gets the best opportunity of all to command the stage with his intense, but much quieter revelations near the two hours’ end.