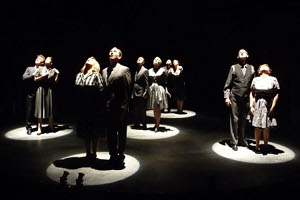 The Ensemble of Impro Theatre’s “Twilight Zone UnScripted” at the Falcon Theatre. / Photo by Dan O’Connor

These master improvisers (co-directed by company members Jo McGinley and Stephen Kearin) play off each others’ verbal and physical cues seamlessly, taking the sometimes-absurd dialogue to such extreme ridiculousness you just have to burst out laughing. Ignoring the old stage adage of never letting the audience know you’ve made a mistake, the few times performers do step on another’s lines or comment in error, the troupe actually acknowledges these moments to the audience, inducing even more laughs and chuckles.

Each “episode” begins after eliciting a word suggestion from the audience. Then the familiar “Twilight Zone” theme music plays and hilarity ensues.

The second episode occurred in a location: “Berlin.” Edi Patterson and Brian Lohmann ably led the skit as spies trying to pass on information to foreign operatives in a dingy cabaret. Michele Spears slunk around not-so-cluelessly (and to great comic effect) as the German cabaret singer with a French accent. Paul Logan convincingly essayed the quiet war refugee missing his red-eyed daughter he had to leave behind on the other side of the Berlin Wall.

The final episode took place in a group setting: “bingo hall.” Spears nailed her portrayal of a naive, single bingo newbie as she eventually discovered the demonic aspects of that particular bingo hall.

The ensemble exhibited great give-and-take, alternately allowing one or another to take center stage or knowing when to just give support. As with all improvisations, it’s hard to know what to expect. What you can expect from “Twilight Zone UnScripted” are solid attempts at making you laugh and keeping you thoroughly entertained the entire two hours you’re sitting in the Falcon Theatre. Expect nothing less!