Review: U.S. Premiere of Andrew Norman’s ‘A Trip to the Moon’ with the LA Phil and Holst’s ‘The Planets’ 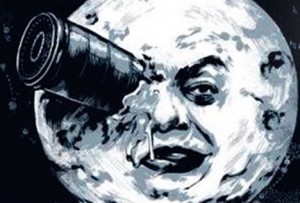 Andrew Norman’s fun and imaginative “A Trip to the Moon,” his self-described “retro-futurist sci-fi adventure opera,” is a ray of sunshine. It received its U.S. premiere with the Los Angeles Philharmonic at Walt Disney Concert Hall on March 2 and 3, paired with Gustav Holst’s epic “The Planets.”

Known for drawing on the classical tradition and experimental music, Norman is one of the hottest composers out there. A finalist for the 2012 Pulitzer Prize in Music, he has numerous awards under his belt, including the 2006 Rome Prize and 2009 Berlin Prize. These honors are well earned, and his latest work confirms his place among the most compelling composers of the day. Better yet, L.A. can claim him as their own — he is an alumnus of the USC Thornton School of Music and joined the faculty in 2013.

Norman’s “A Trip to the Moon” revolutionizes an art form in dire need of a younger audience. Commissioned by Simon Rattle as part of the community outreach for the Berlin Philharmonic and the London Symphony, it saw its world premiere with the Berlin Philharmonic in June 2017. This L.A. Phil commission brought its own creative team, including Teddy Abrams, conductor (and music director of the Louisville Orchestra), Yuval Sharon, director, and Diana Wyenn, choreographer. Norman said it is “first and foremost a children’s opera,” but this adult (and the predominantly adult audience, judging by the standing ovation) loved it.

Taking inspiration from an 1865 Jules Verne novel, an 1875 Offenbach operetta and the 1902 silent film by Georges Méliès, also called Le Voyage dans la Lune (which was featured in the 2011 Martin Scorsese film “Hugo” based on Brian Selznick’s children’s book “The Invention of Hugo Cabret”), Norman sets off on his own creative voyage.

The beginning quarter or so of the one-hour opera is music (sans singing) played to accompany a projection of the Méliès film on a giant screen behind the orchestra. After the astronomers’ rocket lands in the eye of the Man on the Moon, the opera kicks in. As the actors play out their parts in front of green screens on either side of the film screen, they become through the magic of technology (not unlike “Star Trek’s” transporter room) part of the animated lunar landscape on the big screen.

The bumbling astronomers’ sport steam punk costumes (by Ann Closs-Farley) and engage in lively and alliterative conversations in their exploration of the moon. They are highly entertaining, but then the moon people kind of take over. Sci-fi fans will appreciate the retro costumes: silver metallic robes (again, think 1960s “Star Trek”). The moon people speak and sing in “moonish,” a language of mostly vowels with otherworldly harmony that needs no transcription.

Norman says this piece is “to be made by a community for a community,” for world-class professional musicians and amateurs alike. Indeed, the cast of seeming hundreds includes members of the LA Master Chorale, LA Children’s Chorus, Hoover Street Elementary School Chorus and Youth Orchestra Los Angeles. The effect was seamless, the sound glorious. (The Phil’s Symphonies for Schools program will bring the opera to third, fourth and fifth graders this week.)

Another particularly magic part of “A Trip to the Moon” took the radiant moon people into the audience. They turned on their “halos” and wandered the concert hall. The piece grew to galactic proportions with the choruses, surrounding us at times with an ethereal sensation reminiscent of Gustav Holst’s “Neptune.”

After intermission, Abrams, who definitely got a workout with the Norman opera, returned to conduct a full-throttle performance of “The Planets.” Making use of the giant screen already in place for “A Trip to the Moon,” the Phil projected an image of the universe from the Hubble Space Telescope.

In this day of science and reason (well, at least in some circles), a suite of music dedicated to the astrological, and not the astronomical, meaning of the planets might not resonate, but we can still use Holst’s magnificent and magnificently orchestrated music to introduce young people who are interested in space science to classical music. Even stripped of its astrological influences, “The Planets” is deeply satisfying music in large part because of Holst’s exquisite orchestration, influenced by no less than Stravinsky.

Unlike many other interpretations, Abrams’ “Mars, the Bringer of War,” started out much louder, but with the same intensity. From there, Abrams took the audience on an often wild (“Mars, “Jupiter, the Bringer of Jollity” and “Uranus, the Magician”) and at other times more serene (“Venus, the Bringer of Peace” and “Neptune, the Mystic”) sonic ride.

Abrams vacillated between having the orchestra playing at maximum volume, which in Disney Hall can be earsplitting, and barely audible as when the harps played a single note at the end of “Uranus.” It was an engrossing performance of a popular work that one never tires of hearing, especially performed live by a world-class orchestra and an exciting young conductor.