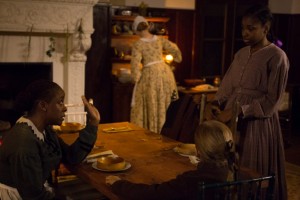 "Two Pictures in One," part of a series of short History Lit plays by Unbound Productions / Photo by John Thvedt

Some of the best 20 minutes of theater can currently be seen in Pasadena as part of History Lit 2016: A Festival of Timeless Stories, running through July 31 at the Pasadena Museum of History.

The short plays take you on a journey not only through literature and history, but also through a guesthouse on the grounds of the Fenyes Mansion, the gardens and the museum, where there is currently an exhibit on Flying Horses and Mythical Beasts: The Magical World of Carousels. The experience is rather magical as you wander from play to play and scene to scene and day fades to night.

I saw Two Pictures in One first — and maybe that wasn’t such a good thing. These are 20 minutes of the most powerful theater I’ve seen. They were so powerful, in fact, that the other two plays couldn’t stack up after that.

Two Pictures in One juxtaposes the stories of two families in two periods of American history: a white family during the American Revolution and an African-American family 10 years before the Civil War. Sitting in the drawing room of the Curtin House in Pasadena with the actors, the audience becomes a third party, bringing our present-day story of race, equality and freedom in America — one that is making the news every night in the form of racial tensions and protests — to the one playing out before us. The final image — and word — of this play will stick with you long after the lights go out.

It’s not that The Garden Party and The Girl Who Owned a Bear are not interesting. They just didn’t have an emotional impact anywhere near the first play. Also, their endings did not seem as clearly defined as they could have been.

Given the consistently excellent acting (with work by some really fabulous young actors as well), the fun summer venue and the strong production values, the two-hour History Lit is worth a visit. I’m really looking forward to Wicked Lit this fall; last year’s installment at Altadena’s Mountain View Mausoleum and Cemetery blew me away.