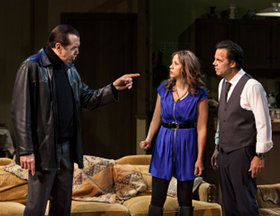 Chazz Palminteri, Elizabeth Rodriguez and Kenny D'Aquila star in the world premiere of "Unorganized Crime," written by Kenny D’Aquila and directed by David Fofi and now playing at the Elephant Theatre in Hollywood. / Photo by Daniel Reichert

Kenny D’Aquila’s world premiere “Unorganized Crime” receives a sturdy mounting at the Elephant Theatre with a very strong cast; sharp, quick-paced directing; and a clever, credible script. Black comedy would be an apt description of this theater piece. How else would you categorize a stressed-out waiter taking out his frustrations on life-size dummies while simultaneously mining the humor in prostitution and drug use and offing a person or two?

Writer D’Aquila quite ably takes on the role of Gino, the ostracized son of a mob family. Relocated to a suburb far, far away from the family, Gino copes with the disrespect he ruefully receives waiting on tables. His wife Rosie (the wonderful Elizabeth Rodriguez), when not pulling tricks to get food on their plates, practices do-it-yourself head shrinking on Gino. Two life-size rag dolls get the comeuppance they deserve as stand-ins for the abusive restaurant customers Gino has to serve. Gino abuses the dummies as every waiter fantasizes they could.

Gino’s older brother Sal (a deliciously menacing Chazz Palminteri) drops in unexpectedly to share the news of their mother’s passing. And then the fun really begins. Sparks fly fast and furious as Rosie battles with Sal, then Gino defends Rosie, then Sal attacks Gino. This delightful round robin goes a few rounds with all three actors equal in their talents during this battle royale.

In supporting roles, Jack Topalian inhabits his role of Haakim, the sleazy, creepy landlord preferring Gino’s rent money too late in order to receive Rosie’s sexual favors instead as payment, and Carmen Argenziano effectively makes the most of a small but pivotal role as the Prisoner.

Director David Fofi keeps his cast uniformly cooking as only a good, yet dysfunctional mob family should be, with lightning deliveries of razor-sharp quips and digs.