Review: ‘Villon’ at the Odyssey Theatre 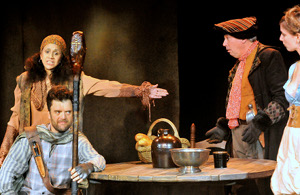 The bawdy adventures of a criminal/poet from the 15th century? That promise alone was enough to get me out to see the new production of “Villon” at the Odyssey Theatre. While Francois Villon is not a name familiar to most, for those in the know, the 15th-century French criminal/poet holds a lingering fascination. Contemporary artists including Bob Dylan and Truman Capote have cited Villon as an influence. At a time when established poets celebrated courtly ideals and aristocratic pursuits, Villon turned convention on its head and wrote of the lowlifes, rogues and thieves that he moved among.

We can think of Villon as the bad-boy rock star of his time. By age 25, he held a University of Paris master’s degree and already had enough of a reputation (and friends in high places) to get a pardon from King Charles VII for killing a priest in a knife fight. From then on, biographies indicate he was either running from the law or in prison, usually for robbery. He lived a peripatetic life, apparently going from caper to caper with his gang of thieving friends. It seems surprising he had any time to write poetry at all. By age 32, he was heard from no more, probably meeting his end in a dank tavern or at the end of some provincial hangman’s rope. But he left us with one of the most famous lines of translated poetry ever: “Where are the snows of yesteryear?” from his greatest work, “Le Testament.”

In addition to his unusual themes, Villon also innovated with diction and vocabulary, to an extent that some believe he profoundly influenced English poetry. An important part of Villon’s appeal lies in his liberal use of inside jokes, underworld slang and hidden meanings, things his fellow roustabouts would have understood, but opaque to the high-born contemporaries he parodied.

Playwright Murray Mednick seems to have sought to emulate that sense of impenetrability, with mixed results. The verbal repartee comes at you fast, bouncing from character to character with unexpected angles, like a ball caroming around a squash court. The characters’ lines fly so furiously at times that it’s easy to become adrift.

Even though the setting is medieval and the actors are dressed in quasi-medieval garb, the words, phrases and even mannerisms that Mednick gives his eight characters remind us that we are witnessing not a simulacrum of the past, but a modern conversation with a distinctly contemporary bent (I detected in the Villon character even a hint of Groucho a couple of times). There are the expected bawdy topics, but the profanity used in phrases such as “I don’t give a rat’s ass” creates an effect that can be somewhat jarring.

It is difficult to fathom a plot of “Villon” per se, or even a story arc; it seems to be more a series of vignettes that take place in a tavern somewhere in France. Mednick has taken what I would describe as a “meta-theater” approach to his work, using the familiar play-within-a-play structure and with the so-called “fourth wall” dissolved between players and audience. There are plenty of lines delivered straight to the audience. I suppose these things help define what makes a play modern these days, but I think a straight narrative approach might have been preferable for a deeper immersion in the goings on.

Kevin Weisman, known for his TV roles on “Alias” and “Hello Ladies,” plays the lovable ne’er-do-well Villon with a brash, commanding assurance. He is the proverbial small man carrying a big stick — actually a cudgel that he uses at times to bop his antagonists. Other characters, drawn from Villon’s real-life relations, include his female companions Isabeau (played by the saucy Alana Dietz) and Clotilde (Peggy Ann Blow, who gets some laughs) and the Old Villon (Gray Palmer).

While a few video projections give us a brief sense of Villon’s actual poetry, Mednick has given us what amounts to his modern reimagining of Villon’s poetry. He pays meticulous attention to rhythm and pace. Thankfully, the dizzying pace slows down in the last third of the one-act play, where paired conversations and a soliloquy offer thoughts on the creative vocation and life’s dangers.

With its improvisatory feel, this is “Seinfeld,” 1453 — lots of talk about very little. But unlike the TV show, the locution at times feels forced, as during the numerous awkward pauses for brief narrative explanations to the audience like “Time Passes.” What does come through ultimately is a lighting of the wick of curiosity about the real Villon and what made this lowlife such a memorable and compelling figure up to this day.