Review: ‘Wait Until Dark’ at the Geffen Playhouse 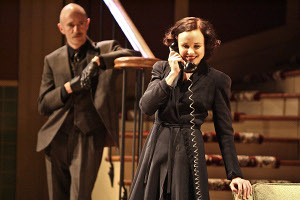 Matt Shakman directed this production with much attention to detail. Unfortunately, some of the details — that are too jarring to ignore — disconnect the plausibility flow of this good thriller.

Hatcher has re-imagined Frederick Knott’s 1966 play (which became a film in 1967) back to 1944 with some sharp retorts worthy of 2013 (To compliment a young girl’s deviousness: “One day you’ll make yourself a great mistress.”).

Con artists Roat and Carlino break in to Sam and Susan’s Greenwich apartment looking for a misplaced doll with valuables hidden inside. The search for the doll comes up short when Susan returns earlier than expected, but they aren’t caught in the act because Susan is blind and doesn’t see them or notice them exit. Roat and Carlino, now “Detective Carlino,” return at a later time approaching Susan alone. “Detective Carlino” grills Susan on Sam’s whereabouts and his relationship to a woman murdered the night before in the neighborhood. Susan is tasked with defending her husband’s innocence while unknowingly protecting herself from being conned out of the doll.

The payoff of the evening is the last climactic 20 minutes when the apartment lights go completely black on stage. Remember, Susan is the only one who doesn’t need light to move about.

Alison Pill ably limns Susan, but sometimes Pill sees when Susan shouldn’t. Also Susan’s other heightened senses don’t come into play consistently. As Mike, Sam’s old war buddy, Mather Zickel charms his uninvited presence past Susan’s guard. Rod McLachlan gives his Detective Carlino the sleaziness and edginess of a conman not 100 percent on top of his game. Adam Stein portrays Roat, the lead scammer as soulless, charmless and calculating. (I couldn’t help but wonder how different the dynamics between Roat and Susan or between Roat and Carlino would have been if Stein had channeled Christoph Waltz’s delicious scoundrel in “Inglourious Basterds.”) Brighid Fleming has the most success with her Gloria, the bratty, but spy-skilled teenager Sam has asked to help Susan maneuver around.

Suspense doesn’t really build to the expected ending. It starts and stops. But what an ending!