Review: West Coast Premiere of ‘That Lovin’ Feelin’’ at the Lonny Chapman Theatre 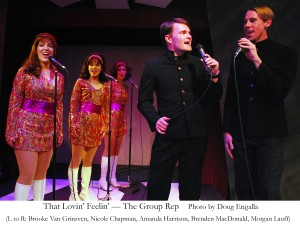 The Group Rep presents "That Lovin' Feelin'" at the Lonny Chapman Theatre. / Photo by Doug Engalla

Most people know of the Righteous Brothers only from listening to oldies stations that sometimes play their hits, such as You’ve Lost That Lovin’ Feelin’, Unchained Melody and others. People who came of age in the 1960s might know a bit more about them, such as the fact that they are not brothers and that they came out of Orange County, California. The interesting and dramatic back story of this talented duo is given a righteous treatment in the musical That Lovin’ Feelin’, written by James Zimmerman, a theater professor at the University of Wisconsin. The Group Rep presents the West Coast premiere of the show, which runs through Feb. 21, at the Lonny Chapman Theatre in North Hollywood.

Bobby Hatfield and Bill Medley met each other in the early 1960s. Their love of doo-wop and rhythm and blues united them, and it quickly became clear that Bill’s sonorous tenor and Bobby’s soaring alto were perfectly suited to each other. It wasn’t long before promoters and radio stations recognized their talent. Their partnership lasted more than 40 years, until Bobby died in 2003. Their marked differences in temperament and personality made for a rocky ride with repeated breakups, yet the pair eventually learned that they were wholly dependent on each other for their success. The co-dependency of their relationship forms the dramatic basis of the musical.

The structure of the drama involves some time travel: the play opens in the rehearsal space of a Midwestern university where an aging Bill Medley (Paul Cady) has agreed to an interview with a young reporter from the local paper. Reluctantly at first, he begins to tell the story of how he and Bobby got together in 1962, how they got attention and how they ultimately found fame. As he tells the story, the younger version of himself appears (Morgan Lauff) as well as the young Bobby (Brenden MacDonald), and it is these two who perform most of the drama, with occasional shifts back to the present-day interview.

Credit must be given to Director Jules Aaron for finding these two young actors because they are wonderful in their roles and sound great together, conjuring up a believable simulacrum of the sonics of the originals. Lauff has nailed the deeper voice of Medley, and while MacDonald can sound a bit nasally in his solo falsetto, his harmonies with his partner are spot-on. MacDonald also has the job of showing a petulant, reckless side of Bobby. He portrays an insecure man, at times obnoxious and vulgar, who whines about how his partner is trying to control him. I can’t say how much of this was exactly true to life (the author apparently had some input from Bill Medley in writing this), but it does make the Bobby character harder to like.

At just under three hours, the play is too long. The second half in particular is indulgent in showing what must be every little twist and turn in their career. The result feels episodic and needlessly drawn out. Part of the problem is that the first half ends on such a high note with the recording and release of You’ve Lost That Lovin’ Feelin’. In comparison, the second half’s glide path feels like it is more or less downward, albeit with a few positive hiccups along the way. If I had another small criticism, it is the puzzling repeated use of slang that does not fit the period. People did not start sentences with “dude” in the 1960s and “getting wasted” seems a questionable usage for that era as well.

Against that, there are some other touches on the positive side that add to the fun. Patrick Burke gives us a very amusing fright-wigged Phil Spector, who produced some of their hits (and has a co-writing credit on Lovin’ Feelin’). In addition, three actresses, each of whom plays multiple roles, including wives of the boys, enliven the proceedings, especially as the comely backup singers sporting some swingin’ sixties style. Amanda Dawn Harrison at one point shows up as a young Cher who apparently sang backup on the recording of You’ve Lost That Lovin’ Feelin’. Who knew?

With a live four-piece combo providing musical accompaniment, the production sometimes has the feel of live dinner theater, but only because the Righteous Brothers came from a time when singers were also entertainers and felt compelled to offer up a certain amount of schtick when onstage, which these actors do. Those days are long gone, but it is both amusing and instructive — especially if you are not old enough to remember — to see how the pros did it a generation ago.