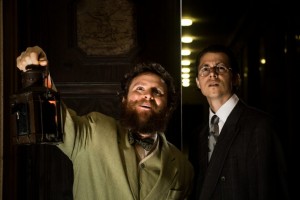 Crawford Tillinghast (Dusty Hess) and Dr. Howard Phillips (Eric Keitel) get a peek into the world beyond in Wicked Lit’s latest. / Photo by John Thvedt

Does it seem too early to think about Halloween, Day of the Dead and other such seasonal spookiness? Not if you’re Wicked Lit, which has just launched their annual salute to the supernatural. As in the past seven seasons, they have commandeered the Mountain View Mausoleum and Cemetery in Altadena, a majestic yet eerie venue that is perfectly suited for its specialty: mobile theater of the macabre.

To negotiate narrow spaces and quickly move audiences through various spaces, Wicked Lit divides guests into three groups, each of which sees three short plays in a different order. Bookending the show and during each intermission, there is another performance of sorts, with twisted “counselors” welcoming everyone to Camp Mountain View. It’s mostly silly patter, warming up the crowd, making announcements, promoting future shows, etc. The real shows take place in the adjacent mausoleum…

… or the cemetery, the setting for Anansi and the Demons. This is an African folktale originating with the Ashanti people of Southern Ghana. Anansi is a trickster spirit often taking the form of a giant spider who uses his cunning to prevail over more powerful oppressors. The Anansi tales served as a thread of continuity for the slaves of the Caribbean and the Southern United States (where the spirit was known as Aunt Nancy) as well as a strategy of resistance against their plantation overlords.

Guests are led by a pair of colonial-era British soldiers into “darkest Africa” where they meet some of the locals who are being harassed by a colonialist “ambassador” intent on spreading Christianity throughout the realm. Various spirits haunt the group, leading to a climax where the hapless ambassador is tricked into an agreement when threatened by a huge bat-like creature, which is not what it first seems.

The main part of the mausoleum becomes a stately old mansion in The Shadowy Third, a story by American novelist Ellen Glasgow about a novice psychiatrist hired to provide professional consultation for the owner’s deeply disturbed wife, whom we find lashed to a hospital bed in an upper room. The wife manages to convince the psychiatrist that her husband is trying to commit her to get her money and is having an affair with the comely housemaid. Her nervous invalidism (a condition that Glasgow herself suffered from) has apparently been brought on by the untimely death of their little daughter who, it seems, does not want to stay dead, and ultimately helps Mommy out of her predicament.

From Beyond takes place throughout the back halls and staircases of the mausoleum, made extra-atmospheric by copious amounts of stage fog and dim, blinking lights. It is adapted from a story by renowned horror meister H.P. Lovecraft. The play opens with an extremely distraught gentleman being questioned by police about the disappearance of a colleague. The man insists that there are accursed and horrible entities that are connected with the disappearance, and they force him to return to the house of his friend. Through flashbacks, we understand that the missing friend had developed a machine that called forth parallel realities, with nasty consequences. When the machine is inadvertently restarted, havoc ensues.

I wouldn’t characterize any of these three stories as truly scary, but the trio of directors and the production staff are good at creating moods that are unsettling, unnatural and sometimes shocking. Lighting and sound effects are an essential part of the emotional impact of each story. This year’s crop of productions makes good use of large-scale puppets and especially emphasizes meaty, dramatic roles for the female actors.

The concept of staging adaptations of classic horror literature is a great one, made even better with such a venue as Mountain View. The three producers behind Unbound Productions — Jeff G. Rack, Jonathan Josephson and Paul Millet — have taken what used to be only a Halloween show and formed a year-round theater company, which now mounts various staged readings as well as an in-school theater program. Wicked Lit remains, however, their centerpiece, and it should not be missed by anyone interested in an immersive and kinetic theater experience.