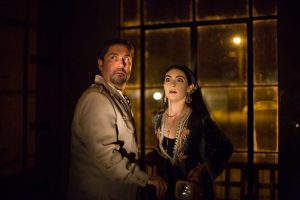 As Halloween approaches, the gates to the Mountain View Mausoleum and Cemetery in Altadena have once again been thrown open for the most recent iteration of Wicked Lit, a trio of site-specific, spooky-themed plays that runs through Nov. 11. This year we are treated to Thoth’s Labyrinth, written by Wicked Lit Executive Director Jonathan Josephson, The Open Door, adapted by Kirsten Brandt, and The Damned Thing, adapted by Jeff G. Rack.

There is actually a fourth piece of drama, called Liliom (written by Kerry Kazmierowicztrimm), which occurs in a clearing outside the mausoleum. It is essentially a framing device that provides a pause between each play, allowing time for the three groups the audience has been divided into time to reassemble. Liliom seems to be a kind of purgatory where those who have met with violent deaths await their turn to pass through the gates… to some kind of great beyond. The four actors, their wounds still fresh, entertain the audience with banter, playing charades, and juicy stories about their lives. It’s also a venue for Wicked Lit announcements, invitations for membership and to sell tickets to a raffle.

My group was first treated to The Damned Thing, an 1885 short story by Ambrose Bierce. We begin in the chapel of the mausoleum where, seated in the pews, we gaze upon a body lying on a bier under a bloody sheet. A local sheriff requests a friend of the deceased to identify the body and begins to question him, the last to see the dead man alive. Suddenly, a figure emerges from under the sheet on the far side of the bier (leaving the prostrate form of the body under the sheet) and we soon understand that this is the spirit of the man who has just died. He was a scientist who had been deciphering an ancient Native American text. Neither of the two others can hear him as he begins to weave the tale of how he came to be under the sheet. There was this thing, you see—a damned thing—that he inadvertently summoned… The audience is guided to another spot outside where we see the remains of his beloved dog that had been torn apart by the spirit.

Finally, we are guided to the cemetery across the street, where we stand in front of a large tomb. Still in flashback, the scientist (played with maximum melodrama by Ian Heath) summons the beast (who apparently is a Native American spirit not at all pleased that his grave has been desecrated). It approaches our group—we cannot see it, but we sense it. Branches of surrounding trees move in unison to suggest something large and unseen. Hidden speakers play an eerie mix of moans and unearthly howls.  Smoke and red flashes emanate from inside the tomb as our scientist finally gets what’s coming to him. To me, this was the best of the three plays.

For Thoth’s Labyrinth, our group is split again into threes and each group follows a pair of Indiana Jones-type characters who are on a search for the Egyptian Book of Thoth, which is said to have certain magical properties inscribed within. We move through the dim mausoleum, piling up clues that will lead to the ultimate destination of the book, which some earlier Egyptologist had purloined and hidden there. Once again, hidden speakers transmit a rising crescendo of moans, drones and shrieks as the riddle is closer to being solved. Finally, our group is reassembled in the main hall, the competing treasure hunters discover secrets that connect them to each other, and then the final spell is cast. Something large, sinuous, ancient and inhuman lurches out above us and just as quickly is gone, vanished in a puff of stage smoke. And that’s about it… not sure about the fate of the characters.

The Open Door is based on an 1893 story by Margaret Oliphant and tells the story of an English naval captain who is visiting Scotland, where he and his wife are hoping for a cure for their sickly son. For this segment, the group moves around the balcony of a building overlooking a reflecting pond/garden. The boy explains that, out by the old ruins at the edge of the property (the far end of the reflecting pond), a voice has been repeatedly calling with the words, “Mother, let me in!” First the local doctor and then the parish reverend come to examine the boy and try to get to the bottom of his strange assertions. After it is ascertained that there is indeed something unholy going on in the ruins, the elderly Reverend Moncrieff (Richard Large) leads an expedition that relies on the superpowers of Christianity to subdue the troubled spirit. For those familiar with The Exorcist, you expect him at any moment to begin chanting “The Power of Christ Compels You!” With another few poofs of stage smoke, the reverend emerges victorious, and the son has miraculously recovered his health.

Word has spread about the Halloween edition of Wicked Lit, and the size of the audiences has grown. But so have the sophistication, technical competency and military precision of the entire event. While I might have wished for more compelling narratives from The Open Door and Thoth’s Labyrinth, I have only praise for the way the producers have used the property in novel ways that so nicely fit the stories. And the location itself will always be a five-star attraction. While exploring obscure works such as these is to be encouraged, in future productions one can also hope for a reprise of some more well-known works, especially those by Edgar Allen Poe, which Wicked Lit has done so successfully in the past.