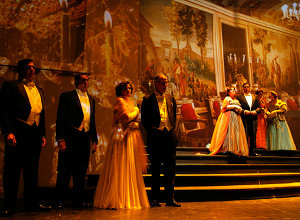 It’s not often that operagoers get as many “firsts” as Dulce Rosa offers up at the Broad Stage. To begin with, this is the world premiere of an opera 10 years in the making; it is the first Isabel Allende story made into an opera; it is also the first full opera the Broad Stage has ever presented; and finally, this work marks the launch of LA Opera Off Grand, a new series of eclectic repertoire intended to broaden the appeal of opera.

All this newness is no confluence of accidents. Think of Dulce Rosa as a cross-cultural volley fired from the HMS Old Guard into the midship of a now-majority Latino Los Angeles. By merging the classic and the new, the Euro-centric with the Latino-centric, we begin to see the possibility that some form of hybridized cultural phoenix may eventually arise to help ensure that places like the Dorothy Chandler Pavilion, LA Opera’s home, will have a thriving future beyond this generation.

When you think about it, the transformation of Los Angeles’ “high culture” has been ongoing for some time now. From what was once a largely WASP-y pursuit, it became a magnet for Jewish culture mavens, and now seems increasingly imbued with the Latino influences so dominant in our city. One cannot say it is simply a coincidence that LA Opera Director (and conductor of Dulce Rosa) Plácido Domingo and LA Philharmonic Music Director Gustavo Dudamel are both from south of the border. The decision to mount a new work by a composer raised in Costa Rica, adapting a book by a Chilean author and conducted by a Spanish/Mexican opera star is just the latest effort to acknowledge and engage the complex and growing Latin culture in Los Angeles.

Before getting to the opera itself, it is worth noting how Dulce Rosa progressed from pipe dream to finished opera. When composer Lee Holdridge and librettist Richard Sparks (also the director of this production) realized the dramatic possibilities of Isabel Allende’s short story “Una Venganza” (“An Act of Vengeance”), they approached the author with the idea to create an opera. Allende shrugged and skeptically said okay, but never really expected anything to come of it. But Holdridge and Sparks had two aces in the hole: one was that they already had a working relationship with Domingo, having produced several operatic works for young audiences. The other was that Sparks is married to photographer Jenny Okun, the daughter of legendary music producer Milton Okun (he discovered John Denver, among others), and Milton and his wife just happen to be big LA Opera supporters who were willing to underwrite a new opera.

Just as Allende’s story is succinct and distilled, the opera happily feels somewhat the same. Even though the story has been expanded with additional characters, the pace is brisk, the story is easily comprehensible, and it doesn’t drag on for hours. The action takes place in an unnamed Latin American country in the early 1950s during a time of violent revolution. Rosa is the daughter of a senator who has retired to his hacienda in the countryside. Father and daughter live an idyllic existence until the leader of a guerilla army attacks their compound in the midst of a government overthrow. The father is killed and the rebel commander takes Rosa for himself in a rape scene that ends Act I. Recovering from the ruins of her life, Rosa plots her vengeance upon the commander, who is now a general in the new regime. Meanwhile, we learn of the tragic past of the general who wallows in contrition for what he did to Rosa. He is apparently a good man who made a mistake. He can’t get Rosa out of his mind — but Rosa is now married to Tomas, a political radical and his nemesis. That sets up everything for the surprising and melodramatic finale.

The singing standouts in Dulce Rosa are the deep-voiced men. The always-reliable Greg Fedderly plays Rosa’s father with just the right mix of authority and tenderness. Mexican baritone Alfredo Daza plays the guerilla commander, and it is a treat to listen to his strong, clear singing.

I wish I could be as enthusiastic about Uruguayan soprano María Antúnez who plays Rosa. She is strikingly beautiful and her acting is fine, but her voice is off. I don’t mean she can’t hit her notes, but the dynamics are lacking and, worst of all, she suffers from what I call opera singer-itis — the tendency to sound like she is practicing diction lessons when she enunciates words (this is an opera sung in English).

Plaudits must be given to the innovative stage projections by Okun. The simple set consists of a large broken arch with walls and smaller arched windows on either side. These blank spaces are filled with images, mostly photos that Okun has chosen to illustrate the places in the story, which include a hacienda, a church, sepia-toned street scenes and the jungle. This is a very effective way to keep the visuals interesting even while constricted by a tight budget.

The music is quite good, with plenty of melodic interest, and thankfully a minimum of drab recitative incidental music. The orchestra in the compact Broad Stage is a fraction of the size of the one that you would hear in the Dorothy Chandler. The deeper than usual orchestra pit also means the sound doesn’t have quite the impact that it might otherwise — and if you are in the orchestra section, you cannot see conductor Domingo at all.

There are warnings inserted into the playbill that you will be witnessing murder and rape and that this is not an opera for children. They even insert a flyer into the program encouraging viewers to help stop sexual violence around the world by contacting various organizations. It may sound pretty horrific, but it’s not. The rape scene actually seemed kind of tender, not at all an act of violence, while the murder was less than you would see on an episode of “Law & Order” — or in Tosca for that matter. So don’t let any of it scare you away. It’s a night of solid entertainment and a glimpse of the future of “culture” in L.A.