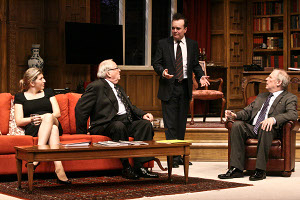 The British have arrived at the Geffen Playhouse in the form of the hysterical, perfectly cast U.S. premiere of “Yes, Prime Minister.”  Co-writer Jonathan Lynn skillfully directs his sharp script (written with Antony Jay and based on their award-winning BBC television sitcom of the same name) with the precision of a winning race car driver.

The play centers on a potentially disastrous conference the Prime Minister hosts at his country residence. Unbeknownst to him, his scheming cabinet secretary has conspired to have the signing of an extremely lucrative treaty for the construction of a Kumranistani oil pipeline crisscrossing all of Europe from Kumranistan to Britain. Knowing the PM is opposed to England’s adopting the euro, the cabinet secretary keeps the signing condition, a “minor detail,” hidden from him. To what lengths will the PM and his team go to achieve a successful conference and not lose face with his constituents and the rest of the world?

The four principals — so evenly matched in their physical comedic skills, comic timing and total believability in their absurdity — volley off one another’s lines as if the play is a championship tennis match. Michael McKean inhabits the role of the bumbling, clueless Prime Minister, allowing flashes of his political savvy and basic common sense to peek though at the most momentous, satirical times. Dakin Matthews as the Cabinet Secretary, the Prime Minister’s right-hand man, delivers his tongue-twisting and lengthy speeches ever so smoothly to great, GREAT comic effect. WOW!!!

Jefferson Mays, as the Principal Private Secretary, vividly (with both facial expressions and body language) acts as the “moral compass” of this “better of two evils” group of conniving politicians. Tara Summers projects such the right amount of sass, femininity and political shrewdness as the save-the-day Special Policy Advisor.

Kudos to Simon Higlett for the PM’s lush, detailed office set with a two-story window into the outer court, and to Andrea J. Cox and John Leonard for their voice of God that makes the audience jump out of their seats.

This two-hour-20-minute piece of British humor certainly traveled well across the Atlantic.