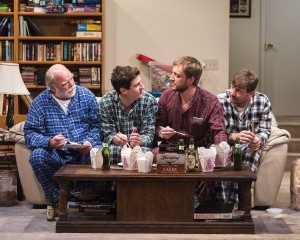 L-R: Richard Riehle, Gary Wilmes, Frank Boyd and Brian Slaten in “Straight White Men” which makes its West Coast premiere at the Kirk Douglas Theatre in collaboration with Center for the Art of Performance at UCLA. / Photo by Craig Schwartz

It’s clear, even when the salacious song “Yankin’” by the unapologetic woman rapper “Lady” blasted during the pre-show wait at Center Theatre Group’s Kirk Douglas Theatre, that playwright Young Jean Lee seeks to push your boundaries of comfort. The night I attended “Straight White Men,” an older man shouted that Lee should be “strung up” for the song selection, to which Lee took to Facebook to write a rebuttal, saying that she would love to see if the response would differ had she selected a white male rapper instead.

But that curmudgeon of a man probably would have been more satisfied at a corporate-washed Broadway play. That’s not what Lee stands for. Touted as “the most adventurous playwright of our generation” by The New York Times, Lee has built a reputation of writing and directing plays that push identity politics into the limelight.

Lee’s process is unique — challenging herself to write a play that she least wants to. Her previous work, “Untitled Feminist Show,” expressed an ideology as a wordless choreography of nude performers dancing to the synth-heavy band The Knife. Her latest work, “Straight White Men,” poses a question: How do we re-define gender stereotypes as the power of the alpha male declines?

For so long, the patriarch, aka the “straight white men,” was by default the governing institution. Their assumed role was to rule parliament and be the breadwinner of the family — to leave a legacy. But the iconic fantasy of the Marlboro Man has vanished, leaving us to wonder, “where have all the cowboys gone?”

In the play, the men have regressed into overgrown children that still have an affinity for sing-a-longs, video games and chest-pounding rituals. Upon first glance, the staging makes it look like an episode of a ’90s family sitcom. It’s Christmas in Midwest suburbia. The living room is carpeted and has a Lazy Boy couch and old family portraits hang on the wall, resembling the set of “Roseanne.” This is the Father’s house where his three sons return home to celebrate, complete with fake Christmas tree and Chinese takeout.

But wait — Lee soon dismantles this portrait of familiarity by probing deeper and dismantling our complacency. The sons pull out Monopoly, which has been retitled “Privilege,” and are caught in a game of political correctness. It’s a subtle cue that times have changed and the odds are not always in their favor anymore. Matt (the eldest) is a perfect example of this. Consumed with the crippling fear of his insignificance, he dropped out of Harvard and moved back home to live with his father. His family desperately tries to bring him out of this rut with pep talks and self-help affirmations. Brian Slaten, who plays Matt, exudes a masterful melancholy that inspires his brothers to come to revelations.

Even though Drew (the youngest) and Jake (the middle) have upstanding positions as a college professor and a banker that drives a BMW, they constantly question their purpose. Drew tries to justify his happiness with self-actualization courses and a regular visit to the shrink, while Jake admittedly accepts the fact that he’s just another “straight white man” that’s coasting on his entitlement. Even his father offers to help by paying Matt’s student loans and encouraging him to aspire to more than his temp job, but Matt refuses to get back on the saddle and enter the real world. This existential crisis plaguing him and other men of his generation to feel self pity and smallness in the modern world is Lee’s way of addressing this very “new” cultural shift.

Lee views herself as an observer, saying “there’s a contradictory expectation these days. One is that they be more deferential, be less macho and take up less space. And the other is that we want them to continue to be typical straight white men because we’re invested in it.”

By all means, go see this hot topic in person and make your own observation.

“Straight White Men” continues through Dec. 20 in its West Coast premiere (in collaboration with the Center for the Art of Performance at UCLA) at Center Theatre Group’s Kirk Douglas Theatre, 9820 Washington Blvd., Culver City 90232. For tickets or information, visit https://www.centertheatregroup.org/tickets/straight-white-men/.