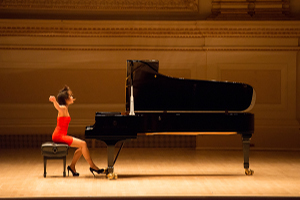 If you have recently started following Yuja Wang, the rapidly rising star pianist in the classical music world, you may get the impression that all the hoopla surrounding her recent fame is due to the attention that the public and the press have paid to the provocative dresses and stilettos she wears on stage. The Chinese news media’s public scolding of her lack of “traditional culture and education” seems to have done nothing to halt Wang’s fame. A YouTube video of Wang performing at a 2010 Sante Fe festival has garnered over 1 million views.

Wang’s rise to fame was actually on track well before the paparazzi-like frenzy over her fashion. At the 2009 Lucerne Festival, Wang with rather light make-up, scruffy hair and long red dress, under the baton of Claudio Abbado gave arguably one of the most provocative, sexy and jazzy performances of the Prokofiev Third Piano Concerto since Abbado made that legendary recording with then-rising superstar Martha Argerich in 1967. It is with the anticipation of this Yuja Wang, now fresh out of a recording session with Gustavo Dudamel and the rambunctious young musicians of the Simón Bolívar Symphony Orchestra that this reviewer eagerly attended Wang’s solo recital on Oct. 13 at the Renée and Henry Segerstrom Concert Hall.

The audience coming in to the Orange County venue also seemed to be expecting something akin to a Sunday afternoon drive in a thrilling red sports car. The expectedly abundant grey-haired concertgoers at the classical music recital were this time joined by young African-American and Latin-American couples and herds of college students from Cal State Long Beach. If a thrilling ride is what they wanted, they got it. Mostly, that is.

As soon as Wang walked on to the stage in her familiar red dress, she opened with Sergei Prokofiev’s Third Piano Sonata in a rapid flurry of triplets that barked like a raspy burble of a Ferrari V12 engine. Soviet musicologist Boris Asafiev described this Tempestoso (Stormy) opening as “like the whirring rail of an arrow flying through the air.” In the Moderato section, Wang slowed things down as if to enjoy the scenic view along the Pacific Coast Highway. In the Allegro Tempestoso, the agitated mood and rapid tempo returns with a dotted half note followed by sixteenth note theme that evokes the oboe’s theme in Lieutenant Kijé’s march. When the rapid but still smooth floating sensation from the triplets is rudely interrupted by the strict march-like rhythm of the quarter notes in the Poco Più Mosso, Wang handled the unnerving turn as if her stilettos were made of Michelin tire rubber. This is the provocative Wang that excited audiences with her music, and less with her fashion.

The music of Frédéric Chopin, however, is as much about poetry and human emotion as it is about virtuosity and technical ability. Garrick Olson, the first American to win the International Chopin Piano Competition in 1970, spoke about how Chopin was physically weak and played softly. As such, Chopin drew in the audience not with power but by enveloping the audience with soft delicate sounds.

Chopin’s Third Piano Sonata was written during a period of relatively good health and tranquility, unlike the second sonata, which contains the famous funeral march and was written during bouts of ill health and a relationship that would have been set to “It’s Complicated” on Facebook. Wang played the lyrical melody after the introduction in the first movement youthfully sweet, but the agitated sense of pain and longing that underscores many of Chopin’s beautiful melodies was notably absent.

The swagger and playfulness Wang displayed in the Prokofiev seemed to have given way to tension and stiffness in her movement. In the brief Scherzo, she took off like a Ferrari eager to get on the highway, speeding past all opportunities to display floral colors and ornaments as that renowned Chopin interpreter Dang Thai Son might. In the nocturnal melody of the third movement, although Wang appeared engaged and played the melody tenderly, she didn’t quite isolate and captivate the listener with soft delicate sounds as Ivan Moravec might with his performances. The final movement is virtuosic, and while Wang displayed immense power with her left bass hand, the many descending scales sounded, well, like a brittle scale.

In the second half of the concert, Wang walked on to the stage in a black dress that was a few inches shorter than her red dress, with a long, thin horizontal slit revealing her abs and a single, large triangle strap spanning one shoulder. Perhaps befitting her outfit, Wang switched the order of the program, resuming with the jazzy Variations for Piano Op. 41 by Nikolia Kapustin, instead of Nocturne and Ballade by Chopin as printed in the program.

Kapustin is a Ukrainian-born composer known for fusing jazz and classical elements. In the Variations, he takes the cold, lonely and dark opening theme played by the bassoon in Stravinsky’s Rite of Spring, and turns it into a cool, laid-back theme. Wang too, seemed more laid-back, as she took it for a riff through its bluesy and ragtime-like variations. The audience could be seen swinging along.

When Wang returned to the stage for the Chopin Nocturne in C minor Op. 48 No. 1, all remnants of cocktail hour at a rooftop bar in a swanky hotel left by the Kapustin Variations seemed to have been sucked out. This least serene of Chopin’s Nocturnes starts in a gentle but angst mood. As the music progresses from a mood of gentle grief to determined hope, the rumble of gentle octaves crescendoes to a thunder with each passing bar. Here we would have expected Wang’s considerable power, speed and technique to come to bear. But climax wasn’t quite achieved, and the emotional resolution that came after fell rather flat. Wang’s performance of Chopin’s Ballade No. 3 in A-Flat Op. 47 was much the same: technically competent, but not engaging.

With an already technically challenging program of Prokofiev and Chopin sonatas, few would have faulted Wang if she had closed the program with Erik Satie’s Gymnopédies. In fact, she concluded with the performance of her signature piece, Three Movements From Petrushka by Igor Stravinsky, which she performed at the 2009 Verbier Festival and recorded for Deutsche Grammophon to great acclaim. Arthur Rubinstein, who requested Stravinsky write a piano transcription of his popular ballet, remarked that “proposing to a beautiful young woman requires only slightly more courage than playing Petrushka on the piano.”

Wang gallantly started the Danse Russse with its opening galloping rhythms. She flared the glissando in a crescendo across the span of the keyboard, much like a flamethrower would in a circus act. Wang crouched and tilted to one side while grunting like Maria Sharapova to emphasize the bass notes, and contorted her torso to get at a hidden rhythm or voice, much as an oyster shucker might with a difficult catch. Yuja was back.

In the second movement, Chez Petrushka, where the scene depicts the puppet Petrushka’s room, Wang evoked a childlike sense of wonder and mystery. The lyrical melody when Petrushka expresses his love for the puppet Ballerina is played in a lonely and somber mood, foreshadowing the following scene where the Ballerina rejects Petrushka and is frightened away. The blur of speed from Wang’s fingers and the light but rapid flurry of notes did indeed look and sound like the legs of a scared Ballerina running across the stage.

The third movement, The Shovetide Fair, where the carnival crowd gathers for a procession of dances, became a stage where Wang got to showcase not just her monstrous power, technique and phenomenal speed, but her masterful ability to bring out the rich musical colors inherent in Petrushka. Wang welcomed the audience to a dreamy scene, playing the softly textured tremolos and the now-familiar Petrushka theme with exotic harmonies, which under her hands opened up like the spreading of a peacock’s colorful wing.

Stravinsky alternates voices between high, middle and low ranges of the piano; this not only has the effect of creating an illusion of the presence of many different characters in a scene but also gives the pianist quite a workout. Wang provided an additional depth of color by giving a percussive effect to each of the voices, which added to the sense of rowdiness in the crowd. When the dance turns to a minimalist trance, Wang swaggered and emphasized the syncopation in each phrase, giving the performance a jazzy flavor. People couldn’t help but bob their heads up and down, tap their feet and feel as if in a block party with all neighbors out dancing in the street.

Wang did indeed bring the crowd to a roaring cheer with Petrushka. For her encores, she first offered another injection of caffeine in the form of Horowitz’s Transcription of Bizet’s Carmen. Here she demonstrated why she’s known as the “Flying Fingers,” as if there was any doubt. In the climactic build-up to the final repeat of the Bohemian Dance theme, Wang didn’t quite muster enough crescendo. So some drama was lost, but the audience was too dazed and excited by the whirlwind left by Wang’s fingers to notice.

With Chopin’s elegant Waltz in C sharp minor Op. 64 No. 2 as the second encore, Wang calmed the excited audience — perhaps so that they might have a safe and relaxed drive home. If she was aiming for a dreamy and floating sensation like Ravel’s La Valse with the descending notes in the più mosso, then the actual result was less than successful, as it sounded rather lacking in motion. When she repeated the theme in much the same manner as before to close the piece, the overall effect was that of a flat waltz.

Whatever the excited talk of Wang’s “flying fingers” or criticisms of her showmanship on stage, her star power has signs of enduring, principally because she communicates the joy of music with sincerity in a way that comes through not just in her physical expression, but in her interpretation. Although Wang’s Chopin performance was uneven, even there she brought out intriguing inner melodies and rhythms that lit up this reviewer’s ears. Wang has the clarity to see through a sandstorm flurry of notes and youthful eagerness to share with the audience what she finds exciting, interesting and fun — yes, classical music can be fun.

For information about upcoming concerts in the Philharmonic Society of Orange County’s 60th-anniversary season, call (949) 553-2422 or visit www.PhilharmonicSociety.org.

Samuel Jang has worked in finance and the non-profit arts world. He worked on IT projects as a business systems analyst at Capital Group while volunteering as a board member and treasurer of a Pasadena-based chamber ensemble, and later joined the ensemble as its production manager to work on cultural exchange projects in Vietnam and Mexico. He started playing violin at the age of 10 and the piano at 12, and continues to enjoy playing as an amateur. He is currently working toward his Chartered Financial Analyst (CFA) designation.