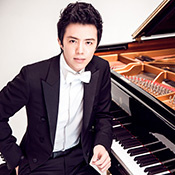 Yundi, formerly known as Yundi Li, propelled to stardom in 2000 after being the youngest (and the first Chinese) pianist to win the International Chopin Piano Competition, and the first to win the First Prize in 15 years. He captivated audiences and the jury with his fresh interpretation, technical brilliance and, most singularly, his deeply lyrical playing — he has the extraordinary ability to transform the percussive action of piano keys into melodies that seamlessly capture the ebb and flow of the human voice.

On Feb. 21 at Disney Hall, Yundi’s eloquent playing was manifest in an all-Chopin program, featuring the complete Ballades and Preludes, which are some of the composer’s most heartfelt works.

Chopin’s four Ballades are dramas that weave together improvisation, dance and sheer virtuosity to tell powerful stories. Those that emerged from Yundi’s playing were rich and varied. Ballade No. 1 in G minor, Op.23 was dark and introspective, with its lonely melodies yearning for warmth and company. With Yundi’s exquisite touch and lavish pedaling, Ballade No. 3 in A flat major, Op.47 became a beautiful reverie, with sublime daydreams interspersed with moments of radiant sunshine.

In the Ballades, Yundi chose a decidedly more measured treatment of the pieces’ turbulent passages, holding back at climactic sections. While his distinctive interpretation created moments of pause, it did not seem to disrupt the excitement of the pieces, with some in the audience jumping in to applaud before the last Ballade’s conclusion.

The second half of the program featured Chopin’s 24 Preludes, a set of miniatures — or, perhaps more accurately, sketches — whose moods fluctuate wildly from piece to piece. Yundi’s playing was intense but poetic, again favoring a more introspective interpretation over an overpowering one. With expressive melodic lines and an opulent palette of tone color, Yundi transported the audience into a kaleidoscope of fanciful characters, colorful scenes and dramatic plot twists.

This recital showcases Yundi’s maturation as a pianist. Since his triumph in Warsaw 16 years ago, Yundi has evolved a distinctive interpretative style, and has distinguished himself from his Chinese contemporaries Lang Lang and Yuja Wang. With his uncanny gift for musical poetry, Yundi has the potential to rival Rubinstein and Arrau as one of the greatest Chopin interpreters of our generation; it will be interesting to observe his development as a pianist in the years to come.