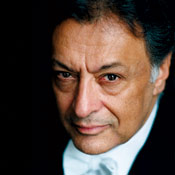 On Monday night, Zubin Mehta and the Israel Philharmonic Orchestra returned for their annual pilgrimage to Los Angeles and an almost sold-out crowd at Walt Disney Concert Hall.

As with previous concerts, a lot of people from LA’s large Jewish community turned out, along with the extra security guards and bomb-sniffing dogs. But, unlike times past, there were no visible protests, at least by 7 p.m.

Although not Jewish himself, the 81-year-old Mehta is a favorite of LA audiences in general (he was the LA Phil’s music director for 16 years from 1962 until 1978) and of LA’s Jewish community in particular because of his long association with the Israel Philharmonic (he was appointed music advisor to the Israel Phil in 1969 and music director in 1977, and was awarded the title of Music Director for Life in 1981, although he plans to retire in 2019) and because of his staunch support for Israel. Mehta, who is Zoroastrian, identifies with the Jewish people. In a 1998 New York Times article, he said that ”We are called the Jews of India, but we have not suffered at all. We are merchants. We are a minority and we stay separate. But we have never been massacred.”

The concert on Monday night featured three works, Footnote, Suite for Orchestra by the Israeli composer Amit Poznansky, the Piano Concerto No. 3 in C minor Op. 37 by Beethoven with Yefim Bronfman as soloist, and the Symphony No. 9 in C major, D. 944, “The Great,” by Schubert.

The first piece on the program, Footnote, is a suite for orchestra derived from Poznansky’s music for the film of the same name. The neo-classical styled music sounds like a cross between Poulenc and Stravinsky with some comedic elements, and it was just the right light appetizer for the heavier and longer pieces ahead. It was alternatively sparse — with piano, harpsichord, the occasional brass instrument and percussion, and pizzicato strings — and lush, with the entire orchestra playing. The melodies were easy to recognize and the rhythms infectious. And the IPO gave it a perfect reading.

Bronfman joined Mehta and the IPO for the Beethoven, and it was full of surprises. First, Mehta  provided one of the most sensitive accompaniments I’ve seen in a while (conducting without a score as one would expect from such an experienced conductor). He held back the orchestra so the audience could clearly hear Bronfman’s fluid playing. Bronfman is a bear of a man, so it is always a little surprising to hear him play so superbly with such a light touch. His trills, of which there are many in this concerto, were so perfectly played that they truly sounded like one note instead of two. The piano introduction to the largo movement is calm and sublime, and Bronfman played it like it was a dream — broken, unfortunately, at times by loud coughing by some audience members.

After the rousing Allegro vivace conclusion, Bronfman held the audience spellbound with his playing of the sublimely beautiful Etude Op. 10. No. 3 in E major by Chopin.

The second half consisted on one work, the Schubert Symphony No. 9. This is the third time LA audiences have had the chance to hear this great work this year. Earlier in the season we heard a fiery performance by Jeffrey Kahane and the Los Angeles Chamber Orchestra in his farewell concert with LACO (see http://culturespotla.com/2017/05/review-jeffrey-kahane’s-swan-song-with-laco/) followed shortly thereafter with a muscular performance by Gustavo Dudamel and the LA Phil (see http://culturespotla.com/2017/05/review-dudamel-conducts-schubert-and-mahler-iii/). On Monday night, Mehta brought his Viennese conducting roots to Schubert’s last symphony with a performance that was all finesse.

When the audience returned from the break on Monday night, they saw an unusual arrangement of the orchestra. Mehta had the woodwind section sitting in a semi-circle around him at the front of the stage where the first and second chair strings would normally be (they were sitting behind the woodwinds). Perhaps Mehta did this because of the pronounced woodwind parts Schubert wrote into this symphony. Either way, it did not detract from the glorious rendition of the “Great” C major symphony by the IPO.

Mehta is 81 years old, and, as he has done in recent years, he walked onto and off stage very slowly and carefully. But when he was on the podium, he looked like a much younger man, moving easily and smiling. Well, who wouldn’t smile with an ensemble as fine as the IPO in front of them?

Of course, the audience was also smiling too, and cheering, so much so that Mehta treated them to two rousing encores, the Slavonic Dance No. 8, Op. 46 by Dvorak and the Tritsch Tratsch Polka, Op. 21 by Johann Strauss II.

It was a love fest on Monday night: Mehta’s obvious love for the IPO and for Los Angeles and the LA audience’s love for Mehta, the IPO and Bronfman.

We hope to be able to see Mehta with the IPO one more time in LA before he retires. In the meantime, Mehta will return to the Disney Hall stage Dec. 14-17 to conduct the LA Phil in Bruckner’s Ninth.