Shakespeare’s Bad Ricky at A Noise Within 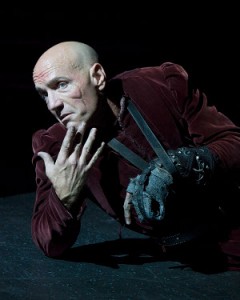 Ho-hummmm… yet another production of Shakespeare’s “Richard III.” What the heck, ANY Shakespeare is better than what’s on TV. And Glendale isn’t really such a shlep. With this enthusiasm to fuel my trek, I journey to A Noise Within.

The clashing of swords, the rumblings of horses’ hooves over rocky terrain, a chorus of shouts explode from the darkness. A regal fanfare and a well-lit tableau introduce King Edward, Queen Elizabeth, their daughter and two young sons, and Elizabeth’s extended family. Into this happy picture of power and contentment scuttles a misshapen, spider-like creature — the king’s brother, Richard. So begins Co-Artistic Director Geoff Elliott’s thrill-a-minute realization of Shakespeare’s enduring portrait of murderous ambition against a backdrop of political intrigue.

In Steve Weingartner’s incarnation, the Bard’s treacherous hunchback is fair of face, subtle, compelling. His seduction of the grieving Lady Anne — so implausible in lesser hands — makes perfect sense here, as he weaves his silvery, silken-voiced web around her. Having witnessed this scene many times, I know what’s coming — yet I, too, am caught in his snare, awakened sharply from my trance when Richard says, “I’ll have her. But I’ll not keep her long….”

Elliott keeps the play moving inexorably forward. His judicious cuts in the text serve this story well, in our era of shorter and shorter attention spans, without omitting crucial plot points. His staging of the night before the final battle between the armies of Richard and Henry Richmond is remarkable for clarity and frugality of movement.

Standing out among a large and competent cast are Apollo Dukakis as King Edward, Susan Angelo as his imperious and ill-fated Queen Elizabeth, the radiant Lenne Klingaman as Anne, and a truly wacky and frightening Deborah Strang as the curse-hurling Queen Margaret. In the roles of the young princes, Arlen Smith and Nicholas Mendez deserve special mention for precocious skill, especially in their intelligent and articulate delivery of the verse.

Set aside the killer performances from a plethora of accomplished actors on Darcy Scanlin’s evocative unit set, the masterful lighting by Ken Booth, a brilliant sound design by the ever-astonishing Patrick Hotchkiss, some truly great fight choreography by Ken Merckx, Jr. and Spike Steingasser, lovely costumes designed by Nikki Delhomme, and a seamless production from an army of technicians. Steve Weingartner’s performance is reason enough to catch this production between now and Dec. 12.