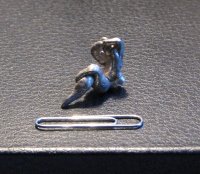 teeny, tiny study of a woman by Robert Graham

If you go to the opera this month, plan to get there a little early and have a cocktail on the Music Center Plaza. While you’re there, take in the ambiance, which is enhanced by fountains, white lights, and sculpture. In particular, check out “Dance Door,” an open door with reliefs of dancing figures by sculptor Robert Graham. Recognized as one of LA’s most important artists, Graham died on Dec. 27, 2008 at the age of 70.

Graham’s work can be seen across the country in civic monuments such as the FDR Memorial in Washington, D.C. Public artwork in LA includes the “Great Bronze Doors” at the Cathedral of Our Lady of the Angels, the “Olympic Gateway” at the Memorial Coliseum, and female torsos on Rodeo Drive and in Venice, the latter visible from a window in the artist’s studio.

I had the great fortune and honor to meet Robert Graham about a year ago, after interviewing him on the phone for an article on his exhibit of sculpture and paintings at the USC Fisher Gallery. Graham’s assistant called after “My Tour With Robert” was published (in December 2007 in the weekly newspaper where I was arts and entertainment editor) and said the artist wanted to invite me to his new studio in Venice because I had written their “favorite article.” (The California Newspaper Publishers Association liked it too. I received honorable mention, top 10% in the state, in the category of “writing” for that article.)

I got a tour of the sunlit space, which forms a kind of compound with the home he shared with actress/wife Anjelica Huston and her production office. The bottom level was a gallery and the upper one a working studio. He was smoking a cigar as he showed me his latest work: paintings of the female nude done with brushes dipped in hot, black wax (which went on display at Ace Gallery in Beverly Hills in March). Graham and I sat and chatted for a while, though we’re both on the quiet side. When I inquired about the price of his tiny sculptures on display at the Fisher Gallery, he was embarrassed to say. But I told him why I wanted to know: to see if I could afford one. As I expected, $3,000 to $10,000 was not in my price range, so he got up and found a teeny, tiny silver sculpture about the size of my fingertip (a study for the series at the gallery) and said, “Here, this is for you.”

Graham made a career-long study of the female figure using live models. He told me this about his sculpture: “Everything is dance. When you look at these great athletic events and you see these movements of the bodies, it’s awesome.”