On Jan. 19, the young British conductor Robin Ticciati led the LA Philharmonic in three works, Melodien by Hungarian composer György Ligeti, Schumann’s Symphony No. 1 in B-flat major, Op. 38, “Spring,” and the Piano Concerto No. 1 in D minor, Op. 15, by Brahms, the latter as part of Emanuel Ax’s Brahms Project (see http://www.laphil.com/Ax), which includes performances of some of Brahms’ chamber music and songs as well as his two piano concertos.

The concert opened with the Ligeti, a piece commissioned by the city of Nuremburg in celebration of the 500th anniversary of Albrecht Dürer’s birth. Although the piece doesn’t exactly conjure the paintings of Dürer, or even traditional landscapes, it is a “soundscape” that reminds one of Ligeti’s Atmosphères, used by Stanley Kubrick in his film 2001: A Space Odyssey. Both pieces employ playing at the highest registers of the strings and woodwinds. Melodien is scored for a small, chamber-sized orchestra, but with decidedly non-traditional chamber-like instruments, such as trombone, tuba and percussion.  The performance on Sunday was as transcendent as the piece itself, and provided a nice balance to the classicism and Romanticism of the rest of the program. 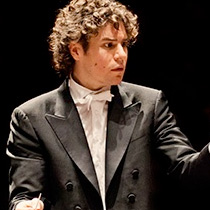 The first half concluded with a stirring performance of the Schumann symphony. Schumann has received more than his share of criticism for the awkward orchestration in his symphonies, and they are definitely noticeable in the First Symphony. However, Ticciati and the LA Phil handled them adroitly. Ticciati’s movements are a bit unusual and awkward looking, but it was clear that he had the orchestra doing exactly what he wanted, and the result was a wonderful rendition.

The concert concluded with a classic performance of the Brahms Piano Concerto No. 1. Brahms has also received criticism, early on by the Wagner and Liszt camp, and even later by some musicologists. But upon hearing a performance of his First Piano Concerto, initially written as a symphony, one understands why it continues to be so popular in the concert hall. It is rich in melody and orchestration, and even though the piano part doesn’t occupy as much of the concerto as it does in concertos by some other composers, it is woven into the music perfectly, so that it is simply the most prominent of the orchestral instruments.

And, if you want to hear Brahms played the way it was intended by the composer, Ax is your man. He has undoubtedly played this work many times, but one can still see his passion. Also, he is so comfortable with the work and with his own playing, that he let Ticciati conduct the piece his way, which was very conservative. The result was an exhilarating performance that brought cheers from the audience. Ax’s relationship with the LA Phil was also evident in the obvious respect they had for him and he for them. I’m sure Brahms would have approved of this performance.

Standout performances were given by Principal Horn Andre Bain and, indeed, the entire horn section, who played sensitively and beautifully throughout the entire concert. And Principal Flute Julien Beaudiment continued his outstanding playing, especially in the Schumann.