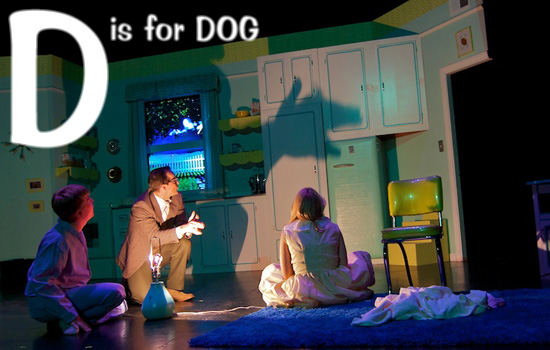 Not your mother’s 1950s sitcom family of working husband, loving housewife and twins, this Rogers household is. Unless the typical household you know consists of a seemingly normal, uber-happy family constantly popping pills! No, there’s more than meets the eye as Rogue Artists Ensemble’s combination slapstick, sci-fi, black comedy “D Is for Dog” reveals.

“D Is for Dog” takes place in the distant future around the days of the twins’ seventh birthday. Entering the Studio/Stage theatre, your eyes will be rewarded with scenic designer Katie Polebaum’s marvelous depiction of a 1950s sitcom kitchen replete with faux stove and never-empty refrigerator, sink, cupboards and Formica dining table.

Muhammed Saleh’s telling videos framed in the large kitchen window deftly reveal the changes in the times of the day in the “backyard” of the Rogers’ home, as well as the “frequency changes” the Rogers’ household goes through (This will make sense in the second act).

The Rogers family is very well cast with Guy Birtwhistle as the rogue scientist for the mysterious Conservation Corporation; Nina Silver as the Stepford Wife-like, TV commercial quoting, pill-popping housewife/mother; and the adult Michael Scott Allen as the boy twin Dick. But Taylor Coffman (also an adult) as Jane, the girl twin, manages to steal the show with her well-played, well-timed delusional fits of madness and occasional sensibility.  (Someone would be wise to cast her as Cynthia Nixon’s daughter.)

Director Sean T. Cawelti gives the first act enough interesting visuals and situations to keep your attention, as the script (written by Polebaum and the Ensemble, based on a story by Cawelti) offers little sense of where all is heading.

But the second act ultimately delivers, as Mr. Rogers finally reveals to his family (and the audience) what his intentions have been all along. Don’t want to give the rest of the plot away, but it is so well worth sitting through the intriguing, but rudderless first act.

The Rogue Artist Ensemble’s trademark puppetry gets maximum and effective usage in the second act. Puppeteers Heidi Hilliker and Benjamin Messmer seamlessly convey the alien and the pathetic nature of their respective puppets. Be ready to be awed and moved by them! They are simply marvelous, as Mr. and Mrs. Rogers would repeatedly and robotically say.

The very able cast handles the transition between broad comedy to genuine pathos most effectively. Bring some Kleenex and be prepared to leave the theatre WOW-ed!

On a side note, try to sit near the front as the sightlines for a lot of the action on the downstage floor get lost.