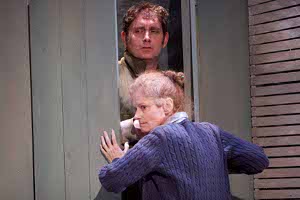 Recent Tony Award winner for his book of Best Musical “Once,” playwright Enda Walsh has “The New Electric Ballroom” mounted by Rogue Machine with both on and off results.

A better title would be “Four Incredible Monologues by Four Superb Actors in Search of a Play.”  It’s easy to see any of the various monologues from this show being scooped up for acting classes and auditions. And I would love to see any and all of these four actors in another vehicle.

Stephanie Kerley Schwartz gets kudos for her single set of a working family’s Irish cottage interior.

Not often enough, Cummings, as the lonely fisherman Patsy, drops by to deliver fish to the sisters, and his electric stage presence brings fresh air to the audience.  Cummings also gets to display his commanding vocal chops later in the 90 minutes, almost too well distracting from the rest of the action.

Audience warning: bring a jacket as temperatures drops numerous degrees from the outside.