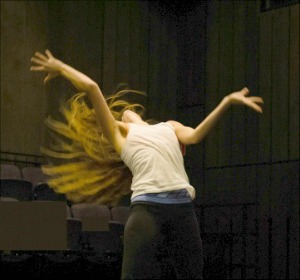 Bringing back some of our local artists, REDCAT hosts the world premiere of Los Angeles-based Rosanna Gamson/World Wide’s “Still/Restless” this Thursday through Saturday, June 2-4, at 8:30 p.m. Describing the work in promotional materials as being filled with “virtuosic, intimate and volatile dancing,” the evening-length octet continues the choreographer’s “investigation beyond the dream state and onto a contemplation of mortality.”

This “kinetic” exploration is the follow-up to the dance theater company’s 2014 NOW Festival’s showing of “Still,” which germinated from a collaboration with Lithuanian actor/improviser Petras Lisauskas. It has since been presented in-progress at festivals in Vilnius and Siauliai, Lithuania.

“Still/Restless” will be accompanied by an eclectic sound score ranging from 17th-century French court composer Marin Marais to new world post-rock band instrumentals. Gamson says, “The word ‘still’ invokes both quieting and persistence: the desire to move. The innate and involuntary built-in restlessness of the body persists, even as the range of motion falls away.”

The members of the company have always been dynamic and compelling performers, so the self-admitted lack of a narrator in Gamson’s oeuvre should not be understood as suggesting a failure to communicate. Better than that, the movement-rich environment will allow plenty of space for individual viewers to interpret what goes on.

Gamson has been touring her work internationally since 2000 and collaborating with foreign and local artists consistently, and is currently on the faculty of CalArts — an LA artist with an international profile.