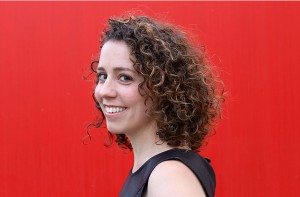 Sarah Gibson / Photo courtesy of LACO and the artist

Peter Oundjian, formerly of the Tokyo String Quartet, has put his chamber music days behind him and has now taken up the baton, accruing to the critical plaudits he has earned over a lifetime as a chamber music partner. Southern California audiences will get an opportunity to hear him in this latest guise when he leads the Los Angeles Chamber Orchestra this weekend in a program of warhorses and fresh debuts.

Making her first appearance on the ensemble’s program is Sarah Gibson, a young composer originally from Georgia, now residing in Los Angeles. Skilled as a creative and recreative artist, she has brought to bear her experience in both fields in the work to be premiered this weekend, warp & weft.

Inspired by her first encounter with the art of Miriam Schapiro, Gibson sought to reflect the artist’s feminist philosophy in her score.

“I especially loved her insight that certain craft mediums, which were generally created by women in the home, were underappreciated. So what she starting doing was literally sewing pieces of other fabrics or other mediums created by women into her paintings. I just love this philosophy celebrating women’s arts, as well as combining mediums, which all feels incredibly musical to me. The title warp & weft deals with the warp of the loom and the weft the criss-cross lines. This very much affected the structure of the piece, with the ‘warp’ were vertical chords, while the ‘weft’ surrounds it with melodies that grow throughout the piece.”

The work is a sort of homecoming for Gibson, as LACO was, in many respects, among her very first stops about a decade ago when she was newly arrived in the city.

“When I first moved to Los Angeles, I immediately went to [them],” she said in a phone interview earlier this week. “They’re quite innovative. I also have friends and colleagues involved with the ensemble. ”

Among them is composer Andrew Norman, LACO’s current composer-in-residence, while Stephen Hartke and Donald Crockett, two composers which she named as exercising a profound influence on her art, were both also previous holders of that position.

“But this was my first foray into developing a creative relationship with them. I love chamber music. Of course, composing for a large orchestra is a lot of fun, but I’ve never done that for an orchestra of this size. I was also really interested in the intimacy that the word ‘chamber’ exudes. It’s been incredibly exciting, and the whole process has been stellar.”

The creation of warp & weft is another product of the Los Angeles Chamber Orchestra’s Sound Investments program, which is devoted to commissioning new works from the most promising younger composers of today. In addition to composing a score for the ensemble, the program also invites their designated composers to attend salons with some of their patrons, encouraging them to share their work while they compose them. It was a situation that presented a welcome challenge for Gibson, who called its result “more a collaboration” than some of her previous work.

“The idea of talking about a piece while composing it, about my working process, is something I’ve never done before. That was something I really loved about these salons, because it made me defend my ideas early on, as well as work harder to make my music even more interesting. It was a great way for me to share the spirit of what I wanted my piece to say. It was a comfortable space for me, but a new one.”

“I feel like I’ve been excited about the compositional process in a way that I hadn’t before,” she added.

Sarah Gibson’s warp & weft will be performed by LACO under guest conductor Peter Oundjian’s direction together with works by Mozart, Beethoven and Ruth Crawford Seeger on Saturday, Jan. 26, at the Alex Theatre in Glendale and at UCLA’s Royce Hall on Sunday, Jan. 27. For tickets and more information follow this link or call (213) 622-7001.