Shakespeare’s Globe at the Broad Stage 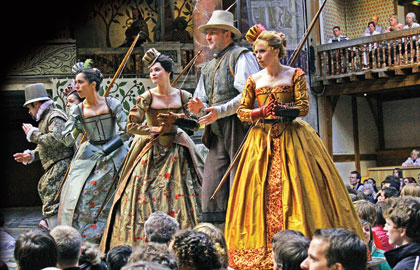 Shakespeare’s Globe Theatre Company will perform “Love’s Labour’s Lost” at the Broad Stage in Santa Monica Nov. 20-29. The opening night performance on Friday, Nov. 20, at 7:30 p.m. will be followed by a party hosted at Loews Santa Monica Beach Hotel and sponsored by Los Angeles Magazine.

“Love’s Labour’s Lost” is a comedy, in which the King of Navarre and his courtiers give up pleasure in pursuit of their studies, but are tempted to re-think their decision when the Princess of France and her entourage pay them a visit. Directed by Shakespeare’s Globe Artistic Director Dominic Dromgoole, the production will have Renaissance costumes, sets and music.

The theater company’s home is Shakespeare’s Globe in London, a faithful reconstruction of the Bard’s playhouse, originally built in 1599. The project to rebuild the theater in its original location was initiated by the American actor, director and producer Sam Wanamaker after his first visit to London in 1949, but wasn’t completed until 1997. Today, the Globe provides an opportunity for people to experience Shakespeare’s plays (and other theater) as the audience did in his day, either seated on benches or standing as a groundling in the “wooden O.”

This is an incredible opportunity to see the world’s premiere Shakespeare company in the architecturally beautiful and intimate 499-seat Broad Stage, which opened a little more than a year ago.