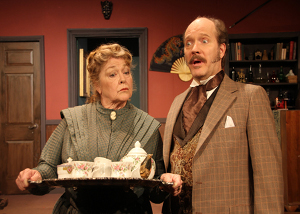 Charles Marowitz’s cleverly written “Sherlock’s Last Case,” currently at the Lonny Chapman Theatre, should give Sherlock Holmes’ purists enough “authentic” details to keep them happy. Being a Holmes spoof, the novel situations presented should be easy for Holmes aficionados to digest and for casual Sherlock fans to thoroughly enjoy. I just wish that despite the story being told in a farcical spoof mode, the explanation and resolve of a major crime could have been more realistically plausible. But hey, it’s a spoof!

Without giving away the entire plot, suffice to say Sherlock and his partner in crime-solving, Dr. Watson, get involved in a very curious case, unlike any in the Sir Arthur Conan Doyle canon of Holmes books.

Chris Winfield portrays the titular character as a smart, but cruel, heartless, and self-centered tightwad. (Kudos to the lived-in Victorian living room set Winfield designed.) Bert Emmett IS Dr. Watson as he shines in his many moments of hysterical facial expressions and double takes.

Emmett graciously allows the two actresses to take the spotlight each time they respectively share scenes with him. Hersha Parady is simply wonderful as their cry-at-a-drop-of-a-hat, yet bubbly, over-enthusiastic housekeeper Mrs. Hudson. Allison King as Liza, a visitor with an agenda, deliciously reveals to the audience her hidden intentions to great comic effect. Patrick Burke as Inspector Lestrade milks every possible laugh out of his dissertations and interrogations.