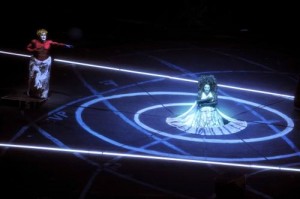 Scheming dwarves, obscene fertility goddesses, floating eyeballs and comic book heroes — what more could one ask for in an evening of light entertainment?

Just kidding about the light entertainment part. “Siegfried” is the third of four operas in Richard Wagner’s gargantuan Ring cycle, and LA Opera‘s ambitious new staging takes viewers another step deeper into a fantastical world of myth and mayhem.  For this production, German director and visual artist Achim Freyer has tucked us in, kissed us goodnight, and launched us into an abstract dreamscape that is often mysterious and puzzling, yet possesses a deep and resonant power recognizable from our most vibrant dreams.

In this segment, we follow the young, impetuous and fearless hero, Siegfried, as he reforges the sword of his father, a slain demi-god, and sets off for adventure, slaying a fierce dragon, vanquishing those who oppose him and ultimately learning fear through his love of the maiden Brünnhilde, a goddess turned mortal, guarded in magical sleep by an impenetrable ring of fire. While the story is comprehensible enough on its own, “Siegfried” is better understood as part of a larger narrative that runs through all four works of the Ring. Depending on what perspective you choose, the narrative could be religious — mapping the transition from the polytheistic world of the pagans to a Judeo/Christian one; or it could be political — a parable of the revolution of 1848, with Siegfried and Brünnhilde as revolutionaries attempting to overthrow the old regime; or perhaps psychological — the Apollonian warring with the Dionysian in human consciousness; or maybe even historical — with links to ancient stories of Atilla and Theodoric the Great. But in all cases, the essence is tragedy — the destruction of one so that another may live and thrive.

John Treleaven plays Siegfried with a comic bull-in-a-china-shop naiveté, looking like a mashup between Ronald McDonald, an oompa loompa and Archie. His singing is steady and sure through the long haul of 4 hours 50 minutes, although lacking the projection and gravitas of tenors like Plácido Domingo. Soprano Linda Watson appears again as Brünnhilde, visually resplendent in her Paleolithic-fertility-goddess-meets-Louis XIV getup, and sounding nothing less than heroic in her delivery. Vitalij Kowaljow, the Polish bass, also returns in his role of Wotan/the Wanderer, impressing once more with his commanding, stentorian delivery. But perhaps the standout singer in this production is Graham Clark as Mime, the power-hungry dwarf who is also the stepfather of Siegfried. His pinched voice, acidic phrasing and stylized movements add up to a riveting performance.

Freyer’s staging obliterates any traces of the traditionalist approach, but retains a large dose of the so-called “modern” style that dates back to 1951, the year the Allies allowed Germany to resume productions of the Ring at the purpose-built festspielhaus in Bayreuth. That year, under the direction of Wagner’s grandsons, the largely naturalistic presentations of old gave way to a severe and minimalistic “modern” style with almost no props and no gestures. The drama took place upon a revolving disc, meant to represent the cosmos. The result was a sensation, revealing more of the inner meanings of the work, and heavily influencing the look of productions for the remainder of the 20th century. Still evident is the large revolving disc, now sharply canted, and the pared down scenery; but from there, Freyer has taken the production in an exciting new direction. In place of simple robes, the characters wear elaborate costumes painted with symbols that, in some cases, transform in color or shape according to mood and thought. Other phrases and meanings are personified by actors in black bodysuits, moving silently, slowly across the stage, always toward stage right — the East, the dawn. Spirits of the gods parade around the dim perimeter and descend from above as if escaped from some crazy cosmic circus. Sexual imagery is very much a part of the concept, with exaggerated female body parts and overt references to Siegfried’s “sword.”

Although stark at times, the overall feeling is of visual richness, much of it thanks to technology. Scrims across both the front and back of the stage are used for a variety of projections, another method of conveying emotion as well as narrative content such as fire, place and time. Color-shifting fluorescent tubing performs multiple duties as pathways, perspective sightlines and objects such as branches and weapons. Smoke effects, broad color washes and strobe lighting also get a lot of play, adding yet more means to pile on the layers of emphasis and meaning.

Certain aspects of the production seem goofy and amateurish, probably on purpose, and some ideas are more successful than others: The dragon Fafner, when he finally emerges from his cave, turns out to be a bitty little thing with a glittery top hat and is just ridiculous, while the unraveling of Brünnhilde’s skirt using red floor cloths pulled in several directions by ropes falls well short of its intended effect.

The music, however, never falls short. James Conlon, conducting his ensemble under partial cover of another scrim, has a fine grasp of how Wagner’s music reflects the emotions and informs the meaning of the characters. Conlon also deftly illuminates the differences in tone and content between the portentous music of the first two acts and the more lyrical third act, which Wagner wrote 12 years later. Rather than feeling bereft from lack of melodic lines, most listeners will appreciate Wagner’s effective use of leitmotifs, short phrases that are interspersed and repeated at various key moments, that both recall and foreshadow dramatic events.  And the quality of sound coming from the pit was superb. Music like this touches the subconscious in unexpected ways. When combined with a production that also taps into these unseen currents, the effect can be grabbing and long-lasting. Rare is the visual art that can do the same, especially film.

“Siegfried” runs through Oct. 17 at the Dorothy Chandler Pavilion in downtown LA.