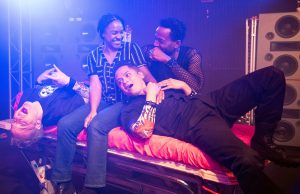 Sigrid Gilmer’s “Mama Metal” is a surreal take on the “mama drama,” the two most famous of which, Eugene O’Neill’s “Long Day’s Journey Into Night” and Tennessee Williams’ “The Glass Menagerie,” figure in this new play. Gilmer’s Humanitas-developed meta-theatrical comedy received its world premiere at the Atwater Village Theatre in May and continues through June 23.

O’Neill and Williams actually appear as characters in the play. Sterling Milburn (Courtney Sauls), our narrator, says she loves Williams and hates O’Neill. Her play is nothing like either of theirs. As Milburn tells the audience in her opening monologue (the house lights stay on, she breaks character at one point to remind us she’s an actress, she tells us that the other actors will play multiple roles), this story will unfold like a dream. She warns us: Don’t expect anything linear. Don’t expect catharsis either.

But she needn’t have made disclaimers. Even without those things, you will find a well-written, engaging and, ultimately, satisfying play.

The “Metal” in the title refers to the heavy metal music that helps Sterling deal with the stress in her life, mainly coming from her mother, Louise/Belle (Lee Sherman), who has Parkinson’s and is nearing the end of her life in a nursing home. The band members of Demonic Afterbirth, “the world’s greatest heavy metal band,” like O’Neill and Williams, come to life in Sterling’s dreams and memories as she struggles to make sense of her life and her mother’s past. Belle does not just sit in a wheelchair; she gets up constantly, entertaining us in flashback and dream sequences.

Though there is much screaming and melodramatic sobbing, this really is a comedy, and the characters Sterling conjures help us through the story as they help her. The sequence with the insurance company customer service representatives (also played by Sherman) is spot on. At one point, Sterling is traumatized by a flashback scene of her mom’s childhood and interrupts it with her sobbing; and Belle steals the show, taking over the storytelling, saying, “That wasn’t the worst thing that happened to me.” Sterling says, “This is my play!”

Also, thanks are due to our playwright for the eye candy in the form of the “Blue” and “Pink” orchid fantasy men (Cesar Cipriano and Christian Telesmar). Gilmer seems to ask: Why should guys have all the fun?

The actors are, across the board, phenomenal — with plenty of theater and TV credits to their names. Even though Sterling complains, “This is my play,” Sauls makes sure this is unquestionably Sterling’s play. But, yes, Sherman is amazing, absolutely mesmerizing to watch in her various iterations of Belle.

Gilmer is a writer and producer, known for “Claws,” “Excess Flesh” and “A Series of Unfortunate Events.” She has an MFA from Cal Arts where she was mentored by Suzan-Lori Parks. She hit the national theater scene with “Harry and the Thief,” a play where a thief has to go back in time to deliver guns to Harriet Tubman. She is obviously a talent to follow.