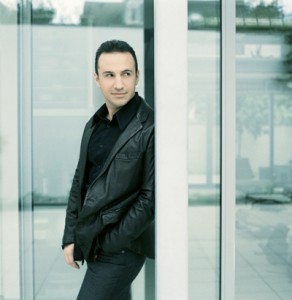 Simon Trpčeski will perform Rachmaninoff’s Piano Concerto No. 1 with the LA Phil and conductor Jaap van Zweden April 16-18 at Walt Disney Concert Hall. Trpčeski and van Sweden have been making the rounds with this piece; the two performed the concerto in Dallas with van Zweden’s Dallas Symphony Orchestra and in Europe with the Netherlands Radio Philharmonic this spring.

Trpčeski (pronounced terp-CHESS-kee) is an award-winning pianist who has proven himself among classical music’s best young talent in concerts throughout the world. His celebrity is perhaps nowhere as strong as in his native Macedonia, where he still lives and teaches at the Faculty of Music of the University of St. Cyril and St. Methodius in Skopje, from which he graduated in 2002. (Not familiar with Macedonia? It’s a small, landlocked republic in southeastern Europe surrounded by Kosovo, Serbia, Bulgaria, Greece and Albania.) In December, the President of Macedonia honored him with the Presidential Order of Merit for Macedonia. Born in 1979, Trpčeski is the youngest Macedonian to receive this honor bestowed on dignitaries who affirm the republic abroad.

Though he will perform Rachmaninoff’s First Piano Concerto in LA, his Avie CD with the Royal Liverpool Philharmonic and Vasily Petrenko, just released in March, features Rachmaninoff’s Piano Concertos Nos. 2 and 3. It debuted in the top 10 on the UK’s specialist classical chart.

No matter what the program, it seems, audiences are bound to enjoy his playing. The London Times wrote of Trpčeski: “His concerts and EMI Classics CDs have demonstrated a range of strengths rarely united in a young pair of hands. Electrifying virtuosity, but no whiff of show-off. The most delicate feelings, yet nothing precious or lacy. Head plus heart, lots of heart. What more could a music lover ask?”

Culture Spot LA: Tell us about the First Piano Concerto.

Simon Trpčeski: It is not played very often. I really love it because it’s the first one and it’s full of freshness and youthful energy that Rachmaninoff shows as a composer and a musician in general. And I believe that it will be a refreshment both for the musicians and the audience in LA.

CS: What about your interpretation of the piece, what can the audience expect?

ST: A lot of passion, and a lot of smile.

CS: Do you smile while you play?

ST: Yes, yes. In the place where the music needs that, absolutely. Of course, the music requires that of me. I believe that this is just a natural feeling and there is no acting. So far my experience is that the audience actually feels something while watching me. I am not doing anything special, don’t get me wrong, I am just enjoying the music. Whether that involves melancholy or pain or awe or a smile depends on the character of the music at the very moment. But I am just trying to be as natural as possible and I am very happy if the audience and the musicians feel that.

CS: Have you performed with Gustavo Dudamel?

ST: Yes, in his first performance after [it was announced that] he was appointed [music director of the LA Phil] in March 2008, and I was chosen to be his first soloist. … It was really, really wonderful to work with him because we are more or less the same age, I think he’s a year or two younger than me. We have a very similar temperament and mentality, although he is from Venezuela and I am from Macedonia, but that Mediterranean temperament and character came along very well. The feeling was like we had known each other for a long time. Communication between us of course was very good, and we performed Prokofiev’s Piano Concerto No. 1, which is also a very young and full-of-life piece, so it was suitable for both of us.

CS: How did you become interested in playing and studying piano?

ST: My first love was the accordion, and the accordion is used for folk music in Macedonia, nowadays for classical music as well, but much more for folk music. At that time at the music school there was no [program to study] the accordion. To me as a child it seemed that I should transfer myself to the piano because of the similarity of the keyboard. … At that time when I was 8, the teachers Romanov [Boris and Lyudmila] came from Moscow… which was great luck for all the pianists in Macedonia because this couple came from the old good Russian school and they raised the level of the piano in Macedonia, really put it on a much higher level. Macedonia is a small country, but it has a lot of talented people, and I was one of the lucky ones who had a chance to work with them. I was going deeper into the classical music world, which is a great thing because Macedonia does not have a very deep tradition in classical music, although … the first institution [the Macedonia Philharmonic] was founded around 1944.

CS: What do you consider your area of musical specialty?

ST: Nothing. My teachers, because they are Russians, were paying attention to Russian music, but they were also paying attention to [many other kinds of music]…. I was taught to find myself in every piece I played. I like to hear a variety of repertory because it fulfills me and I find it very useful for the development of a musical personality in general. The most important thing is to try to feel the music in a very natural way. Of course, one has to have considerable technical command. I was lucky to learn about that from my teachers.