I was an undergraduate in the ’70s when I first heard of John Cage’s 4’33”. At the time, I dismissed the piece — and Cage in general — as ridiculous. I went to Southwest Chamber Music’s first concert in their Cage 2012 series on Jan. 23 with a more open mind. While I wouldn’t say I now am a proponent of his music, I at least left with an appreciation and understanding of his philosophy and compositional process.

The pre-concert talk was invaluable. The concert took place at the Armory Center for the Arts in Pasadena, in the context of an exhibit of Robert Rauschenberg, an artist Cage knew and admired. Curator Jay Belloli’s insights furnished us with the ways the artist pushed artistic limits and broke through traditional boundaries of lithographic techniques and materials, discovering the utilitarian beauty of cardboard boxes transformed into a working door. 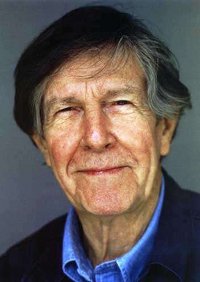 We had the opportunity to listen to Cage reading excerpts from Silence, his book on Rauschenberg, while taking in the exhibit prior to the concert. Just prior to the first piece, Southwest Chamber Music’s artistic director Jeff von der Schmidt and percussionist Lynn Vartan succinctly explained the premise for Cage’s timed works. In the 1930s, he encountered the I Ching oracles, incorporating the concept of I Ching Chance Operations into his compositional process. What I had never understood before was Cage’s departure from the elemental building blocks of Western tonal music: rhythm, melody, motivic structure, harmony, and form. The parameter of time — setting the duration of the piece, or the process by which the performer arrives at the duration of a piece — is Cage’s basic structure.

For the opening piece, Child of Tree, Vartan explained that there is no musical notation for the piece. The piece potentially uses 10 instruments: an amplified cactus, pods from the Poinciana tree, and eight other organic objects from nature. Through a process of chance — in this case tossing three coins and recording the combinations of heads and tails — the divisions of the piece, how many minutes in each section, and the instruments to be used in each section, are determined. As I listened to Child of Tree, it occurred to me that not only were the “instruments” a child of tree, in the sense that they were all organic objects, but that the performer becomes a child as well. As a music teacher of children, I’ve had the experience of students exploring the sounds and potentials of the piano or various rhythm instruments and creating their own “pieces.” By breaking through established boundaries, Cage recreated a child’s freedom of discovery as well as the seeming randomness of the sounds in the world around us.

The second half opened with The Ten Thousand Things, which can be performed with any number of combinations of performers, in this case double bass, percussion, and a speaker. The speaker reads sections of Cage lectures, while at various times one or both instrumentalists make sounds both instrumentally and vocally; at times silence accompanies the speaker, while at others the speaker cannot be heard. Twice during the performance a helicopter could be heard overhead, which somehow seemed to fit. The piece evoked a sense of organized randomness, a microcosm of our modern environment.

The concert concluded with 4’33”, in which the three previous performers stood or sat in silence for the duration. Several people left just before this piece, and it was interesting to observe how some people wanted to “shush” the ambient noise-makers. Gradually one realizes how little silence we experience and how Cage probably intended the ambient noises to be a part of each performance.

When I stepped out of the Armory into the chill night air, I heard the strains of an alto sax wafting up Raymond Avenue. My immediate reaction was, “Ah! tonal music!” And with a smile I mused that perhaps hearing this melody after a two-hour encounter with Cage and Rauschenberg gave me a fresh attentiveness to the seemingly random beauty in the world around me.

The second program in the Cage 2012 series will be Saturday, Feb. 6, at the Armory Center for the Arts. If attendance at the first concert is any indication, order your tickets early. Call (800) 726-7147 or visit www.swmusic.org.

Whereas my last excursion into the world of John Cage with the Southwest Chamber Music opened up new realms of understanding and appreciation, my latest excursion on Feb. 6 at the Armory Center for the Arts was completely different. Whereas my last experience dispelled long-held, ignorant notions of Cage’s irrelevancy to “real” music, this most recent concert countered my misconception that Cage was incapable of writing anything lyrical.

Not so. In a Landscape, which opened the program, was profoundly peaceful and expressive. Originally written for piano solo, Alison Bjorkedal beautifully performed a transcription for harp. The haunting Litany for a Whale closed the first half. According to Cage’s performance instructions, the Litany is a “recitation and thirty-two responses for two voices without vibrato W=WOU as in would H=HU as in hut A=AH L=LL as in will E=E as in under A ‘word’ is sung in one breath but pronouncing each letter separately and giving more or less equal time (.=72) to each letter except the last (or only letter of a word) which is to be held longer than the others let there be a short silence after each response.” Sopranos Elissa Johnston and Kathleen Roland intoned and answered, the live acoustics of the Armory transporting my aural imagination to a vaulted cathedral. The two singers have distinctly different, lovely timbres, which enhanced the effect of the piece.

Alison Bjorkedal was joined by two other harpists, Andrea Puente and Allison Allport, for the final work, Postcard From Heaven. The work is based on three double ragas, melodies which can be used for improvisation in prescribed ways. According to Cages’ performance instructions, “The improvisation may be continuous or interrupted by silences, its total length to be determined by the players. It should begin and end with use on the part of all harpists of the E Bow, for a period of time between one-tenth and one-sixth of the total time length. Any unintended sounds (clicking of the push button, etc.) are acceptable though not to be sought. Ossia: Hum ppp any one tone of the raga as long as the breath holds continuing after a new breath with the same or another tone of the raga.” The harpists did open and close the work with the E Bow, which Bjorkedal showed me is most often used on electric guitar to set up a sympathetic vibration with a string. The harp is such a resonant instrument that even without amplification, the E Bow creates a wonderful ambiance of white noise. In the improvisation sections of the piece, each harpist demonstrated a remarkable creativity and utilization of all the tessitura, harmonics, prescribed pedal combinations, and percussive possibilities their instrument has to offer. While Postcard was not as immediately accessible for me as the first two pieces, it created a meditative atmosphere.