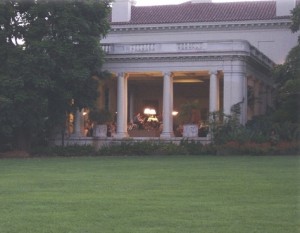 The Southwest Chamber Music Summer Festival at the Huntington is a treasure not to be missed. Saturday night’s concert, sponsored by E. Randal and Pamela Schoenberg, was an exquisite program featuring the music of William Grant Still, Alberto Ginestera, Heitor Villa-Lobos, and Maurice Ravel.

Jeff von der Schmidt developed a diverse musical program that suited the artists perfectly. The first half of the program featured well-known local flutist Larry Kaplan and demanded the full range of his abilities to produce imagery that ranged from pastoral to steam piston. His amazing timbre projected through the strings easily, but occasionally when required could melt seamlessly within them as well.

The “Four Indigenous Portraits” by iconic African-American composer William Grant Still proved a beautiful choice for the opening, especially the warm tonal pallete of the first portrait. These pieces engage a uniquely American treatment of harmony and melody we now recognize as seminal. The second portrait was an abrupt skip to the modern, and the simple pleasure of this infectious rhythmic motif captured an indigenous spirit. The third portrait opened with a beautifully full, lyric cello and eventually enveloped the listener with mellow, rich mid-voice ensemble sound that seemed to breathe. The fourth portrait was the most familiar, like an old childhood friend, clearly American in its manners. The marcato strings were punctuated by tremolos and flute flourishes, and the unexpected pizzicato ending rang like an exclamation point.

Next, we were off to South America with Ginastera’s early work “Impressiones de la Puna” for flute and string quartet. Curiously, “Impressiones” was not a favorite among his early works.  Kaplan sailed through the flowing solo lines of the Lento with a nimble touch, and his tone was warm and engaging. Cellist Peter Jacobson brought his varied musical experiences together to create an inspired performance in Heitor Villa-Lobos’ stylistically idiosyncratic “Jet Whistle.”  His unique interpretation was evident from the first opening riffs.  Later, his driving ostinato resonated marvelously and infused an enigmatic energy into the sound that was unavoidably engaging. Kaplan played until he was out of breath. Each note of the billowing phrases was distinct in the blinding triplets, and the whimsical “out of steam” ending was a “hoot” pulled off brilliantly. Bravi to the both of them; the long hearty ovation was much deserved.

After intermission was a superb performance of the Ravel “String Quartet in F Major.”  Dusk had passed, and night transformed the pavilion into an enchanting backdrop for an impressionist master. The Quartet, although now loved and revered, was soundly snubbed at every performance in its early history. But its genius was simply ahead of its time, and Ravel’s idioms are now heard as defining attributes of Impressionist music.

The cohesion of the musicians in this performance was outstanding. They were able to merge intricate string effects — pizzicato, tremolo, and arco — simultaneously into lush, French, bubbling harmonic texture. Violinist Lorenz Gamma’s masterful technique was mesmerizing as he swept us through the intricate melodic flourishes, especially in the opening movement. He capably led the quartet in the nuances of tempo and dynamic shadings required in this capstone work. Violinist Shalini Vijayan produced a tantalizing tone that bound the voicing together and created a seamless continuum between Gamma and violist Jan Karlin.  The “Trés Lent” movement gave Karlin the opportunity to cast a soothing soulful mood that beckoned the listener to follow.

Much appreciated was the attention to detail in the program notes and staging. Homey floor lamps surrounded the musicians, who were elevated ideally above the audience under a magnificent covered marble portico supported by columns and open to the sweeping lawn. The venue had surprisingly pleasant acoustical properties; a marble box open on three sides makes for a truly effective and elegant resonator.

The final concert of the Festival will be performed August 23 and 24. Don’t miss it!