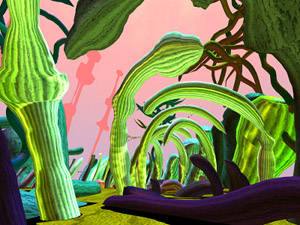 An image from one of J-Walt's Spontaneous Fantasias.

Spontaneous Fantasia is a high-tech virtual reality show in which creator J-Walt dazzles his audience with something he calls “digital animation performances.” In his latest show, “The Omnicentric Universe,” J-Walt creates a planet and populates it with plants and creatures, his brushstrokes dancing through animated landscapes to music he’s also composed. J-Walt’s spontaneous work at a computer station is projected onto a huge screen. Can you imagine a better one than the immersive digital fulldome theater of the Glendale Community College Planetarium? Check out a sample video of Spontaneous Fantasia.

J-Walt, who started these shows in 2003 after years of work in visual effects and animation with companies such as Disney and Sony, has received numerous awards, including an Academy Award and a THEA award. He describes Spontaneous Fantasia this way on his website:

“With my performances, I take literally the meaning of the word ‘animation’: making images come to life. I use my drawing skills to give directions to computer programs I’ve written. I aim to capture the sensitivity of gesture, but I also use techniques which amplify and augment the gestures. The wave of the arm or the stroke of the pen is my foundation, but the effect is much more. My creative process for these pieces is to continually shift between painting, programming, composing music, and performing. My goal is to create a wholly integrated experience.”