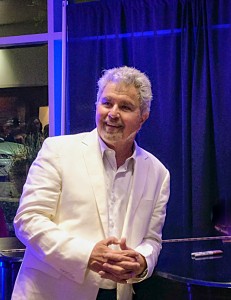 Bantering with his audience at the Arcadia Performing Arts Center on May 20, Steve Tyrell seems to be a man completely comfortable and in his element, as if he’s been doing this his entire life. Only he hasn’t. He came to his singing career in his mid-40s more by happenstance and has since gone on to become one of America’s top interpreters of standards — aka the Great American Songbook.

Before finding success as a singer, Tyrell was a record producer, working with artists such as Rod Stewart, Linda Ronstadt, Dionne Warwick, Mary J. Blige and many others. His transition to singing came as a result of someone in Hollywood deciding his gruff, polished gravel tenor would be perfect for a rendition of the 1936 Jerome Kern song The Way You Look Tonight for the movie Father of the Bride. The movie was a hit, so was the soundtrack, and Tyrell soon began receiving offers to sing elsewhere. According to him, he had never even sung an old standard before that. But his distinctive voice and innate sense of swing mated perfectly with the classic tunes, and a new career was born.

For those unfamiliar, the Great American Songbook consists of popular music written (often for stage or screen) mostly during the 1920s, 30s and 40s. During the course of his show, Tyrell took the audience on a whirlwind tour of some of the main avenues and less-travelled byways of this voluminous American genre. He kicked the show off with the upbeat What a Little Moonlight Can Do (Harry Woods, 1934) before segueing into You’d Be so Nice to Come Home to (Cole Porter, 1943). At Last (Mack Gordon, 1941), popularized by Etta James (and later Beyoncé playing Etta James in the film Cadillac Records), was one of a series of sentimental songs Tyrell sang that he admitted were best known today as “wedding songs.” Others in this same vein were I’ve Got a Crush on You (George Gershwin, 1928), The Way You Look Tonight (Jerome Kern, 1936) and It Had to Be You (Isham Jones, 1924).

Other songs ranged from the semi-obscure 1924 The One I Love Belongs to Someone Else (first popularized by vaudeville star Al Jolsen), to the well-known 1930 hit On the Sunny Side of the Street, to a trio of songs made popular by Ray Charles (You Don’t Know Me, Hit the Road Jack, Georgia). He closed the show with an encore version of That’s Life, perhaps the most recently written of the songs (Dean Kay, 1963), and a huge hit for Frank Sinatra.

Tyrell’s five-piece backing band was superb, and all had a chance to show off their chops as jazz-trained musicians. The standouts were Musical Director/pianist Quinn Jones who impressed with his inventive solos and tasteful fills, and Rickey Woodard who spilled soulful sounds from his tenor sax that emulated Tyrell’s own voice. Lyman Madeiros on upright bass and Kevin Winard on drums both had chances to solo, while electronic keyboard player Jon Allen mostly set background moods with massed string sounds. Also, a word of appreciation must go out to audio engineer Woody Woodruff for a crystal clear sound and a perfectly balanced mix.

Tyrell is an engaging performer who really seems to connect with his audiences (he made himself available to pose for photos with fans afterwards) and truly loves the chance to give these classic tunes the exposure they deserve to new generations of listeners. For 14 years now, he has been playing this music at the Carlyle Hotel in New York for a two-week run every Christmas (replacing the late Bobby Short, who did the gig for 36 years), and also showcases his favorite jazz vocalists on a weekly radio program on local FM station KJAZZ 88.1, which is accessible as a free app. Tyrell’s forthcoming album, his 12th, will celebrate the songs of Ray Charles, an artist he has produced in the past.