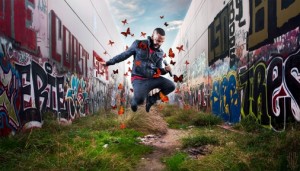 Anyone that went to art school or hangs out with artists knows how precious “studio time” is. Considered a safe space for creatives to develop their work before presenting to the public, this judgment-free zone fosters the synthesis of ideas and collaboration. In that vein, REDCAT presents Studio, an ongoing series in which Los Angeles artists are invited to share their works in progress with an audience. This week, guest curators Pat Payne and JmyJames Kidd brought together a diverse set of performances, including dance, a one-act play and spoken word, for Studio: Fall 2015.

Joshua Silverstein set the bar high by opening the show with “Tell Me I’m Pretty.” In this high-octane one-man-show, he combines beatboxing, spoken word and hip-hop to tell his personal story of struggling with race inequality. In the first several minutes, he showcases his beatboxing talent to impress the crowd — but wait, this is merely a teaser, a bit he would probably do for an audition on “America’s Got Talent,” and no doubt win. He quickly builds upon the gimmick of entertainment by transfusing an emotionally charged narrative with captivating confessionals and spot-on cultural commentary. Portraying issues of racism and identity is a tightrope walk which can result in falling into a pedantic cliché. Silverstein masterfully balances these heavy political issues with satire. This is conveyed from his over-the-top impersonations of rappers and religious zealots to interpretations of media’s biased headlines — all of which bring to light our patriarchal society that’s constantly at a tug of war with race. His loud delivery and comic timing beg for your attention, but his unwavering honesty is the foundation for his performance.

“Creaturetube” is choreographed by Darrian O’Reilly and features a cast of UCLA dancers musing as cats set to a Brigitte Bardot tune. All of which sounds like a nice Pinterest board, but in-person is too sweet to digest. Everything is too obvious, like a Wes Anderson film that was repackaged as an air freshener advertisement — dancers wear cat-printed leggings and matching pixie buns as they twirl to the cheerful beat of French pop. Just like a summer storm, the mood suddenly turns violent without warning. No longer lost in a fantasy, the dancing cats manically fight each other and things get bloody. Movements ambitiously mimic Merce Cunningham’s style, but aren’t cohesive enough for the stage. Back to practice, kitties.

Carol Katz’s one-act play, “Daedalus’ Daughter,” is loosely based on the book, “The Suicide Index,” which is a vivid memoir written by a Daughter that survived her Father’s suicide. Much like the book, the play retains its lyrical prose and piercing honesty. The performers — especially Gleason Bauer, who plays the older daughter — charge the story with a haunting emotional current. Production design and soft amber-hued lighting transforms the stage into a surreal place. Sheer muslin fabric is suspended high in the air, like a veil that covers the past, waiting to be lifted by the Daughter as she picks up the pieces left in a trail by her Father’s legacy. As she recalls the day he died, a black-and-white film of her wandering at the beach during childhood is projected on the hanging fabric. Trapped in a web of family history and drama, it’s easy to get caught up in this story.

Tumi Johnson performs a solo contemporary dance accompanied by voiceover of her own poetry. Her fluid movements and original choreography make for a distinct personal brand. Moving with control and agility, she commands a flow that feels fluid to follow. A recording of Tumi reading her poems and a song from Psalters, a Christian folk-punk band, set a sort of sanctimonious tone. Parts of her poetry carry a powerful weight — “I sweep along thought highways of ‘what ifs,’” but most of the time it’s rooted in a new age mentality — “the citrus like ballooning of inhale”—that feels best suited for beginner yoga students.

“Brouhaha” is a dance choreographed and performed by Genna Moroni and Thibaut Eiferman, who met while training with the Ate9 dance company. Informed by the Gaga technique (no, not Lady Gaga, it’s a practice created by Ohad Naharin), their dance incarnates a powerful self-awareness and urgency to keep pushing forward. This philosophy is celebrated in the dancers’ movements, which appear with laser-cut precision and explosive energy. Up-tempo electronic music adds an extra voltage, but the duo’s technique makes a bigger impression.

For more about REDCAT, visit www.redcat.org.