The Sunset Safari, an after-hours visit to the Los Angeles Zoo for SAFARI CLUB families hosted by the Greater Los Angeles Zoo Association (GLAZA), took place on April 21. The evening showcased the new LAIR habitat (living amphibians, invertebrates and reptiles) and the beautiful Tom Mankiewicz Conservation Carousel. Also featured were keeper talks where families could learn about several animals, including koalas and gorillas; animal feedings of komodo dragons, Vasayan warty pigs and more; and “animal walkabouts,” which featured chats with keepers and the chance to observe small animals, such as a great horned owl and a skink, up-close. An international-themed buffet dinner and music concluded the festivities. 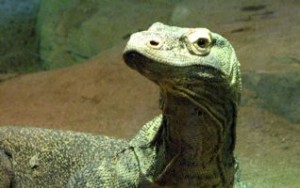 Komodo dragon at the LA Zoo

The LAIR just opened in March and features more than 60 species of amphibians, invertebrates and reptiles from around the world in a total of 49 exhibits. Visit http://www.lazoo.org/lair/multimedia/ to see the LA Zoo’s humorous commercial campaign for the LAIR, featuring actress Betty White, GLAZA co-chair, and rock guitarist Slash, a GLAZA trustee. 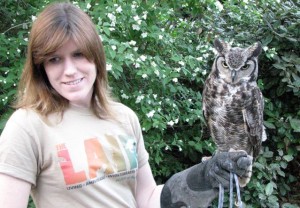 An LA Zoo keeper with a great horned owl

The Tom Mankiewicz Conservation Carousel, which opened last October, features 66 artisan-crafted figures as diverse as a komodo dragon, poison dart frog, clownfish and Sumatran tiger. The vibrantly colorful carousel was commissioned by GLAZA and made possible by a generous gift from Ann and Jerry Moss and by figure sponsorships from individual benefactors. The carousel spins to music by the Police, Go-Go’s, Cat Stevens, Amy Grant, Janet Jackson, Bryan Adams, Joe Cocker, Styx, the Carpenters, Herb Alpert and the Tijuana Brass and other recording artists from the A&M label co-founded by Moss with Alpert. 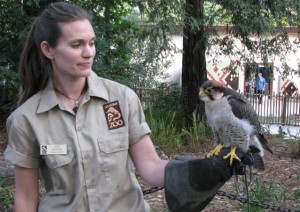 Another LA Zoo keeper on an "Animal Walkabout"

The Sunset Safari event was a wonderful reminder of ways animal lovers can help the LA Zoo.

Donors to the SAFARI CLUB, which is GLAZA’s premier annual giving society, support the Zoo and have the opportunity to experience events that offer up-close experiences with wildlife and demonstrate the latest developments in zoo research and conservation efforts. Tax-deductible donations to the SAFARI CLUB, which begin at $1,500, have an impact on many levels. Locally, they support the Zoo; globally, they contribute to the Zoo’s conservation and breeding programs.

For information about the Safari Club, please contact Nancy Simerly at (323) 644-4717 or nsimerly@lazoo.org. 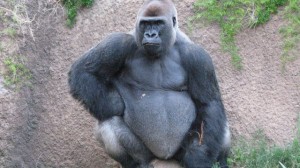 A gorilla at the LA Zoo

More than 40 of the hand-carved and hand-painted carousel animals have been claimed for sponsorships, among them Snakes on a Log (GLAZA Trustee Slash and his wife Perla), the Praying Mantis (GLAZA Trustee Holly Robinson Peete) and the Bear Cub (the Elton John Charitable Fund).

This year, TV Land, which airs the “Hot in Cleveland” TV series starring Betty White, named the Los Angeles Zoo’s new baby orangutan after White’s character “Elka.”  The gift concluded a spectacular string of events celebrating the 90th birthday of GLAZA Co-Chair White, known for her 50 years of devotion to the Los Angeles Zoo and her life-long commitment to animals.

GLAZA’s Animal Naming conservation program allows groups and individuals an opportunity to develop a deeper connection with a Los Angeles Zoo resident while supporting the Zoo’s work to promote wildlife preservation and breeding projects at the Zoo and around the world.  Many animals are available for naming with donations ranging from $1,000 to $50,000 commensurate with the animal species chosen.