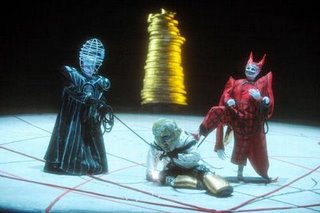 LA Opera’s “Das Rheingold” brings a number of unusual references – try Dali and Picasso, Fellini, and “Hellraiser” on for size – to the 19th-century Wagner opera at the Dorothy Chandler Pavilion.

With this first installment in the company’s historic foray into Wagner’s epic Ring Cycle, director and designer Achim Freyer introduces a surreal motif that sets the stage for three more productions that will continue the story about a magic ring that grants its bearer dominion over a fantastic world of dwarfs, giants, gods and mortals.

Freyer, a renowned artist known for provocative work in European theater, opera and visual arts, made his LA Opera debut in 2002 with Bach’s “B Minor Mass” – which got boos from the audience, at least partly because that piece is not usually staged in theatrical fashion – and returned in 2003 with a production of “La Damnation de Faust.”

In his dream/nightmare vision of “Das Rheingold,” Freia and the Rhinemaidens have bloody-looking red mouths and bald white heads, reminiscent of demons from a horror film. In the beginning, they float ominously with their mirror images in the flowing waters of the Rhine River, created of billowing fabric agitated by people underneath.

In general, the characters seem somewhat abstract and rarely move about the stage or seem to interact with each other. The gods, Wotan, Fricka, et al, wear costumes seemingly inspired by “Hellraiser,” and stand behind Dali- and Picasso-like cut-outs that serve as both set design and costume, emphasizing the sense that Freyer (and co-costume designer daughter Amanda Freyer) has created a live painting on stage. (Fricka’s long fake arms actually recalled a character in the surreal “fishy, fishy” scene in Monty Python’s “The Meaning of Life.”)

Unfortunately, baritone Gordon Hawkins, as Alberich, is hidden inside a huge dwarf head the entire evening. The costume may be interesting, but it distances the character from the audience.

Loge, played by Arnold Bezuyen, received the most applause at the curtain calls, perhaps because he moves, looks and acts more naturally as the Joker- and devil-inspired demi-god with a red, flame-like costume and four arms.

That’s just the tip of the iceberg; the visual circus grows to vast proportions, as if an impossible number of clowns keep stepping out of a tiny vehicle. There is too much going on at any one time: There are projections of colored bands or swirling rings on a scrim that remains between the stage and audience (created with co-lighting designer Brian Gale), light sabers and giant hands, and even a parade of bizarre circus characters near the end of the opera.

Freyer undoubtedly wanted to create a spectacle worthy of Wagner’s Ring Cycle. It is, after all, the biggest work in Western music, consisting of four operas totaling about 15 hours, and making it the most ambitious project – both financially and artistically – that an opera company can undertake.

While Freyer’s style sometimes dazzles, it also distracts from Wagner’s music, which was sung marvelously by all the cast, performed wonderfully as always by the orchestra, and conducted as passionately as ever by Music Director James Conlon.

It’s not a fait accompli that an elaborate and visually lavish production will overpower the music and libretto. For instance, LA Opera’s last show, “The Magic Flute,” was a fabulous success, drawing ooh and aahs from the crowd.

Even so, it is always exciting to see new work, and this “Das Rheingold” is something creative enough to draw new audiences from beyond the opera circle – lovers of fantasy and sci-fi and artists of all sorts – as long as people are still shelling out for entertainment in this economy.

And speaking of the economy, by the time all is said and done – including next month’s “Die Walkure,” next season’s “Siegfried” and “Gotterdammerung,” and the presentation of all four operas consecutively in 2010 – the cost is expected to reach $32 million. LA knows it is lucky to have such generous patrons of the arts, like Margaret and David Barry, Dr. Armin and Barbara Sadoff, the Andrew W. Mellon Foundation and the Eli and Edythe Broad Foundation. When those names were projected on the supertitles screen, there was plenty of applause. The Broads donated $6 million, and, without them – let’s face it – there might not be much of an art scene in LA.

You have to hand it to General Director Placido Domingo and Conlon for dreaming big and aiming to put LA Opera on the world map. As Conlon once said, “I want to see LA Opera become a hub of Wagnerian activity in the coming years so as to instill our audience, and especially our young people, with a thirst for this fantastic mix of glorious music theater, the world of myth and human relationships.”

Thousands of opera fans travel to take in every new production of the epic series. It will be fascinating to see the global response to this one.