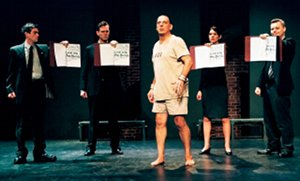 “Imagine a boot stamping upon a human face—forever.” Indeed, you won’t have to do too much imagining in the current run of George Orwell’s ‘1984’ by The Actors’ Gang in Culver City; the brutality, rage and paranoia seething within the claustrophobic totalitarian world of Oceania bubbles vigorously on the surface at the Ivy Substation on Venice Boulevard, and the spectacle is as riveting as a car wreck.

“Ignorance is Strength.” Anyone with an American high school education has most likely read Orwell’s famous 1949 dystopian novel (or at least the CliffsNotes). But its tone of unremitting paranoia and oppression often comes off a bit heavy-handed for some readers. As a play, however, the raw anguish of the protagonist combined with the relentless multimedia assault of the “Newspeak” of Big Brother create a disturbing circus-like atmosphere that commands attention. There is probably more humor in the play than I remember from the book, and a bit of partial nudity further elevates the fun factor.

“Doubleplusgood.” The play opens with Winston Smith sprawled in his prison cell/interrogation chamber at the Ministry of Love, which is simply defined by a square of light, an ephemeral “wall” that constrains the protagonist and focuses the action. From there, we never leave the cell, except for flashbacks reenacted by Smith’s interrogators. While the six-member cast is uniformly strong, V.J. Foster towers over all with his portrayal of Smith, the apostate who dared to defy the numbing state-required conformity and pays for it with his very soul. As the interrogation and electroshock torture continue and Smith is gradually worn down, we can actually see Foster’s hulking physical presence diminish before our eyes — a physical and psychological belittlement that seemingly shrinks and condenses his being. It’s a powerful piece of acting by any standard.

“War is Peace.” The set is bare, black and minimalist and the lighting largely static (perhaps a bit too much so), but it works well as a blank canvas on which to paint Smith’s back story as told via ricocheting, animated dialogue between Smith and his interrogators. His forbidden love affair and acts of civil disobedience are cleverly replayed by the interrogators, as is his growing devotion to the man he believes is the leader of the coming insurgency — the enigmatic Goldstein. Ultimately, the head interrogator O’Brien wrings the last bit of hope and humanity from Smith by coolly stating that love, like everything else he thinks he knows, is an illusion. The only thing real is the enemy and our hatred for same… Death to Eastasia! is the battle cry. It’s the ultimate cruel sneer emanating from the exponent of a soulless state.

“Who controls the past, controls the future.” This production, originally mounted by The Actors’ Gang in 2006, was and is directed by Tim Robbins from an adaptation by Michael Gene Sullivan. It’s not difficult to see that the adaptation, written in the middle of the George W. Bush presidency, attempts to draw parallels between events of that administration and the fictional Oceania. On one level, it’s true — the tortures at Guantanamo, the lame evidence leading to the Iraq War, the media propaganda. But a few years on and the narrative has shifted. Guantanamo and Iraq have become for the most part historical footnotes, and the Big Brother we need to watch out for now is more likely to be corporate Internet titans like Google and Facebook who daily gather more and more information on each of us… only to sell to advertisers. But there are real Oceanias that exist even today — North Korea comes to mind, a society that seems almost eerily modeled on Orwell’s book. To know that there continues to be such a grim totalitarian place like that in this world is what keeps ‘1984’ so chillingly relevant.