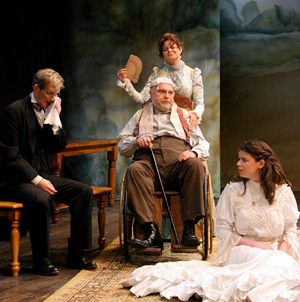 Fair warning: You ought to disregard this review. Read it if you like, then forget it because it is likely to have little to do with “The Seagull” you may see at the Deaf West Theatre. That’s because director Andrew Traister has chosen to double cast each of the twelve characters (save one minor role) in the current Antaeus Company production, meaning there are 23 actors in total. Moreover, he has stated that on any given night he is apt to randomly mix the actors in the ensemble, so anything I am going to say about the acting may be completely irrelevant. That said, I did see an engaging group of talented actors handle a Chekhov masterwork with humor and passion.

“The Seagull” is an enigmatic play that can be a bit of a head scratcher. It is called a comedy, yet ends in the most depressing of ways. It is celebrated as much for what the characters do not say as for what they do say. Nothing much happens: it is about a group of urbane artiste types who come to a farm for a vacation and talk about literature and art while pursuing their objects of lust. Audiences tend to have mixed reactions to this kind of thing. At opening night in St. Petersburg in 1896, the audience reportedly hissed and booed throughout the play, yet it was celebrated as a triumph in a new production only two years later. Since then, it has been enshrined as one of the towering achievements of modern theater.

No doubt Chekhov deserves credit for his radical redefinition of action, his facility for revealing the psychological motivations of his characters, his innovative use of subtext, blah, blah, blah, etc., etc. Having given him his justly deserved plaudits, what can we say about how this play works as theater for a modern audience? It’s mixed really… there are some laughs, some absurdist situations, some good lines; but there is also stagnancy, pretentious chatter about literature and art, and having to listen to the ingenue Nina bleating, “I am the seagull.” Right, and I am the walrus….

There is also the question of how easily the 19th-century preoccupations of the Russian bourgeoisie translate to modern Los Angeles sensibilities. For one thing, nobody in L.A. goes to country houses for the weekend. And if they did, they probably would not be mounting amusing theatrical seances for their friends. But no matter… this is the theater and we can always simply enjoy our role as voyeurs.

My recommendation is to go see this for the actors, for a fine bunch they are. The night I went, Laura Wernette played the diva actress of a certain age, Arkadina, with an unselfconscious verve that felt just right. Michael McShane as her brother Sorin was also a delight to watch, struggling to participate in the goings-on even as his strength ebbed away. Also remarkable was my favorite baddie from “Robocop,” Kurtwood Smith, as Dr. Dorn, and Joanne Strapp as the irascible Masha. The work these actors have put in to shape every nuance of their roles is evident and makes this theater event time well spent. It is probably safe to assume that the director has been equally as assiduous in choosing the other actors I did not see. Some combinations of actors are bound to work better than others. So go and enjoy with the awareness that your mileage will surely vary.

The Antaeus Company’s “The Seagull” continues through April 15 at the Deaf West Theatre, 5112 Lankershim Blvd., North Hollywood 91601  (one block south of Magnolia; free parking available in Citibank lot on Lankershim south of Otsego)  . For tickets, call  (818) 506-1983 or visit www.Antaeus.org.