‘The Art of the Steal’ 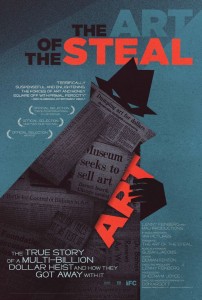 You might have heard about a new documentary called “The Art of the Steal: The Untold Story of the Barnes Collection.” Director Don Argott makes the case that it’s a crime to move the $25 billion collection of impressionist, post-impressionist and modern art amassed by Albert C. Barnes from its present home in a Philadelphia suburb to center city. Argott, who also directed “Rock School,” says the idea goes against Barnes’ wishes and represents “the biggest act of cultural vandalism since World War II.”

A friend in the arts community who is a documentary filmmaker sent an email out just the other day recommending the film. She said, “Anyone interested in art, museums, nonprofit organizations, Board of Directors, charities or POWER AND MONEY should enjoy this!”

I was lucky to see masterpieces from the Barnes Collection when they traveled to Forth Worth’s Kimbell Museum years ago. I wish I had also had a chance to see them in their original setting, a 12-acre arboretum less than five miles from Philly. The collection is apparently going to relocate to “Philadelphia’s museum-lined Benjamin Franklin Parkway as part of a $150-million public arts project in 2012,” according to the LA Times. Read the entire article here:

The film opened yesterday at various theaters in LA, including the Landmark and Laemmle. The Landmark in West LA will have a Q&A with the filmmakers following today’s 7:20 p.m. show.