The Boomerang Effect at the Odyssey Theatre 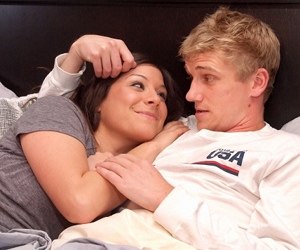 In the world premiere of Matthew Leavitt’s “The Boomerang Effect,” director Dámaso Rodriguez smoothly weaves the separate tales of five semi-related couples in a fast­-moving show that clocks in at just under 90 minutes without intermission at the Odyssey Theatre in Los Angeles.

All of the cast of 10 more than capably handle their extensive, rapid-­fire dialogue, sharply and cleverly written by playwright Matthew Leavitt.

With the set being a bedroom, the subject of sex predictably does not disappoint as the play’s main focus.  The play opens on Paul (Luke McClure) receiving oral sex from Stephanie (Kim Hamilton).  What could have led to eroticism quickly becomes anything but, as the incident turns hysterical and somewhat heartbreaking in their afterglow.  Arguments ensue after Stephanie reproaches Paul for checking his texts during the aforementioned activity.

The second scene involves the failed attempts of Andrew (Will Christoferson) to have sex with his girlfriend Renee (Tiffany Lonsdale) as she won’t stop interrupting his sexual advances with her “non-sexy” chatter on everyday life.

The third couple has the unemployed David (Jonathan Slavin) obsessed with interactive Internet gaming as his lover Nick (Emerson Collins) alternately rejects his sexual advances and reprimands him for his inertia in finding a job.  The argument justifying cheating is jaw-dropping and priceless!

The final couple has co-workers (from different departments) Janetta (Liza de Weerd) and Marcus (a hysterical Joel Bryant) waking up together in a hotel bed after a wild night of drunken misbehaving. It seems Janetta believed Marcus’ love declarations during their acrobatic sex and now cannot accept that Marcus has a wife. Marcus remains terribly sympathetic in his excuses and ruses to retrieve all his belongings and get home to his wife.

Performances continue through April 29 at the Odyssey Theatre, 2055 S. Sepulveda Blvd., LA. Show times are Thursdays through Saturdays at 8 p.m. and Sundays at 2 p.m. For tickets, visit http://www.odysseytheatre.com/box.htm or call (310) 477-2055.