‘The Day Shall Declare It’ 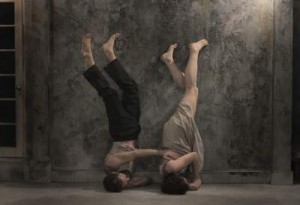 "The Day Shall Declare It" / Photo by Anka Bogacz

There’s a growing trend percolating throughout the theater world, but no one is quite sure what to call it. Some use the term immersive theater; others refer to environmental theater, promenade theater or site-specific theater. Generally speaking, what they mean is a work in which the audience is mobile, exploring a constructed environment that is revealed in stages, with actors who sometimes interact with audience members. The Day Shall Declare It is a new entry into this arena, weaving together a rough narrative, choreography and visual set pieces into a mysterious, dreamlike experience. And this is one dream you are not likely to forget.

One is tempted to measure The Day Shall Declare It against today’s gold standard in immersive theater; I’m talking about Punchdrunk’s Sleep No More, a reimagining of Macbeth taking place in more than 100 rooms in a “hotel” in downtown Manhattan, a multimillion-dollar 2011 production that is still running. Both works are set in a film noir-style 1930s setting and offer the audience a succession of different spaces to explore. But that is where the similarities end. In Sleep No More, a linear narrative is split up in time and space so that people see different parts of the story at different times and places. In The Day Shall Declare It, the narrative is nebulous and fragmented, but it unfolds in a linear fashion where one scene follows another and all viewers see the same thing together. It is also physically much more compact, taking place in four spaces within a warehouse space on East Seventh Street.

The play is created and co-directed by Annie Saunders (who is also one of the actors) and Sophie Bortolussi, a New York-based choreographer and actor who happened to play Lady Macbeth in the original cast of Sleep No More. The decision to choreograph the actors’ movements was a good one and adds layers of visual and kinetic energy to the play. The first scene, in particular, uses movement to great effect as a couple transitions from a romantic dance at first meeting to spinning, pushing, pulling, even hurling each other about as they work out the tensions of living together.

The creators have said that their piece is about work, how it affects us and our relationships, especially in times of economic turbulence (e.g., the Great Depression). For myself, I was unable to glean any truths, profound or otherwise, about work. Perhaps because I was much more drawn into the relationships between the characters and the unexpected turns their lives took as relationships dissolved and reformed. With only three actors (Chris Polick and Nicholas Konow join Saunders), it is easier to understand and relate to the character arc that each undergoes.

Because the actors use all of each space in their choreography, attendees can expect to be touched, gently prodded and moved when the actors need that space. There are also times when the actors may whisper something enigmatic to you, staying in character; suddenly you are no longer the transparent ghost, observing unseen, but are playing a supporting role of some sort too.  It’s an effective device, drawing the observers deeper into the unfolding action.

The final and most memorable scene is choreographed around an antique bathtub, and there are some wonderful moments of dance along the rim and as the tub tips up and down. Saunders’ character assembles a line of jars filled with sand that lead to a doorway; as she decides to leave the man she has been with, a curtain of sand begins to rain down from above the door. Saunders begins to pass through, pauses and then disappears leaving a ghostly shadow behind the still-cascading sand. In the end, shadows and ghosts seem to be the only things left behind from what we have just experienced. While these components of memory are the most fleeting and ethereal, they also often prove to be the most persistent and haunting.

The Day Shall Declare It runs through March 22 at the Imperial Art Studios, 2051 E. Seventh St., LA 90021.Performances start at 8:30 p.m. Wednesday through Friday and 7 p.m. Saturday and Sunday. For tickets ($25), visit https://www.artful.ly/los-angeles-performance-practice. For more information, visit www.thisisthewilderness.com.