‘The Elixir of Love’ at LA Opera 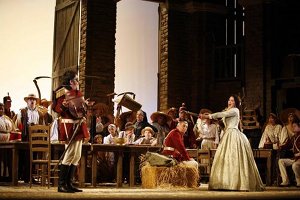 LA Opera's production of "The Elixir of Love" continues through Sept. 30. / Photo courtesy of LA Opera

The beginning of another opera season is upon us, and LA Opera has just the thing to banish those end-of-summer, mid-recession blues — its 2009/10 season opener, “The Elixir of Love,” is a frothy funfest that is as refreshing as a lemon gelato on a hot summer day. One of the most crowd-pleasing of the romantic bel canto Italian operas, “L’Elisir D’Amore,” as it is more commonly known, is improbable and silly, but therein lies its enduring charm. It is a great tribute to composer Gaetano Donizetti and his librettist Felice Romani that it all still works for today’s audiences as well as it did at its debut in 1832. Unlike the big Wagner productions that LA Opera has been rolling out as part of its new Ring cycle, there is no high concept anywhere to be found in this outing — here you simply sit back and enjoy a story filled with longing, laughter, and love in a Tuscan village accompanied by a score of surpassing melodic sweetness.

This “Elixir” is a reprise of a production directed by Stephen Lawless, originally performed in LA in 1996 and again in 1999. We can be thankful Lawless has adhered to a traditional vision in this staging, since it suits the action and music so well. What first appears to be a rather cramped stage set of a few tables in front of three tall doors gradually opens up to reveal an expansive field of wheat upstage with wagons and pieces of farm equipment strewn about for good measure. The story centers on the country bumpkin Nemorino, who is smitten with the decidedly more elegant town flirt Adina. The back and forth between the ardent pursuer and his reluctant quarry is complicated by the appearance of the dashing and macho Sergeant Belcore and the silver tongued snake-oil salesman, Doctor Dulcamara. If these characters seem familiar, that’s because they are all direct descendants from the 16th-century Italian Commedia dell’arte tradition: The two lovers are the Innamorati; the sergeant descends from Il Capitano; and the doctor is, of course, Il Dottore. With only these four main characters (plus the small role of Adina’s friend, Gianetta), we are easily able to follow the story. The large chorus, in rustic paisano attire, adds a welcome sense of bustle and community.

Bigger-name singers were slotted for this production originally, but with two withdrawals due to injury, we are now presented with relatively unknown newcomers: three of the four main singers are making their LA Opera debut. Georgian Soprano Nino Machaidze needed time to warm up her voice, ultimately settling into a competent if unremarkable Adina. Giuseppe Filianoti made a better impression as Nemorino, with a believable urgency in his golden toned if not terribly powerful tenor. Also impressive — and funny — was basso buffo Giorgio Caoduro as the quack doctor who dispenses the supposedly miraculous Elixir. His comedic talents were suitably amplified by his foppish outfit: an orange waistcoat with matching plaid pants and floppy necktie. It may be coincidental that both of these latter singers are Italian, but their deft performances lead one to wonder whether perhaps these countrymen have a greater innate capability to communicate the profound Italian-ness of these classic roles.

Bel canto opera’s golden age was the first half of the 19th century, and Donizetti, along with Rossini and Bellini, is rightly considered one of its leading lights. After Wagner emerged, this style of “beautiful singing” with its melodic hooks and easy rhythms was looked down upon as frivolous and lightweight. But it never really lost its appeal to the average operagoer. Throughout the many eras that have passed since its creation, “Elixir” has been the perfect tonic that leaves audiences refreshed and smiling, an antidote to the ceaseless sturm und drang roiling out in the world. It is no less true today than it ever was.

“The Elixir of Love” runs through Sept. 30 at the Dorothy Chandler Pavilion.