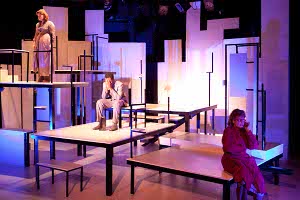 “The process is completely fascinating,” says longtime theater lover Abigail Paine, as she leaves the small West Los Angeles theater.  “It really feels like a privilege to have watched something as unusual as ‘New York Animals’ evolve at Rogue Machine.” Paine says she has seen this mega-workshop of Steven Sater’s newest play three times. “And I’ll be seeing it once more, in the final weekend,” she vows.

The first-ever theater production of Steven Sater’s “New York Animals” is a fully staged workshop, a first stop on the road to New York, after a decade-long process of development. A four-actor cast plays 21 denizens of the Big Apple, as their lives intersect both humorously and tragically during one eventful day. “Paul Reiser read a draft in 2001 and loved it,” says Sater. “Sony bought it, and I wrote it as a TV pilot. We shot it, and in 2002, I wrote another six episodes.”

Sater says the process stalled, and he redid the series for Showtime, then rolled it into an NBC pilot involving Paul Reiser. “It was a year and a half of my life,” he says, “during which I spent a lot of time in LA. I missed my family, so we finally just moved to LA, to Larchmont Village.”

His new LA neighbor was Caroline Aaron, who had auditioned for the TV production of “New York Animals,” then had to drop out because of a family emergency. “She lived three houses from me, and passionately wanted to do the play,” Sater says. “When we would meet on the street, she continuously talked about it.”

Aaron, a well-known Broadway and film actress, told Sater about Rogue Machine Theatre, of which she was a member, and suggested bringing the play to the company’s founder and artistic director, John Perrin Flynn. “I was very moved by the play,” says Flynn. “Steven had another director in mind, but after we met and talked about the piece, he agreed to turn it over to me.”

“I was not going to be able to be involved in the rehearsal process,” says Sater, who was going to be in London during that time, writing a new version of “Chitty Chitty Bang Bang” and simultaneously working on the movie of his Tony Award-winning musical, “Spring Awakening.” “I’m also working on a new musical with Burt Bacharach,” he says, “among other projects.”

The workshop of “New York Animals” opened to the public in June, and has seen several revisions during its run. “It’s been a really great, tremendous experience for me,” Sater says.

Paine agrees. “It’s really worth seeing again if you’ve seen it — and if you haven’t, what’s keeping you?”