‘The Grapes of Wrath’ at A Noise Within 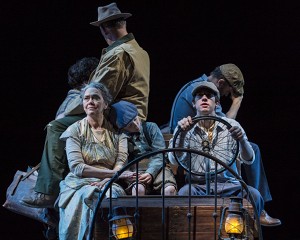 Many Angelenos might be surprised to know that a rich vein of theatrical ore is waiting to be mined amid the malls and casual dining chains of East Pasadena at A Noise Within. The place may be a bit out of the way, but any theatergoers who hesitate to make the trek are doing themselves a disservice, for several reasons. Foremost, there is a fine production of John Steinbeck’s “The Grapes of Wrath” playing that is entertaining and thought-provoking. Another big draw is the newly constructed theater the play is performed in that mixes smashing retro style with state-of-the-art facilities.

Classical repertory company A Noise Within is an established and respected member of the LA theater scene and had been using an old Masonic temple in Glendale as their performance space for 18 years. As the result of a $13.5-million capital campaign, the company was able to secure and repurpose the old Stuart Pharmaceutical building on Foothill Boulevard and opened its 20th-anniversary season in 2011 there.

This 1958 National Register listed property was built by Edward Durrell Stone, the same architect responsible for the Kennedy Center in Washington, D.C., and Radio City Music Hall in New York. From the front, it looks like a mini-me version of a grand mid-century civic arts center, featuring a long modular screen wall with gold knobs, a reflecting pool with fountain in front, and manicured lawns surrounding. You enter the space via a portal indented with stylized pills, an architectural nod to the original business. Beyond the facade, everything was scrapped to make room for a 283-seat theater with 180-degree tiered seating that looks down on an apron stage thrust out from the main stage. The mix of high-tech implements and stylish surroundings makes it a great place to see theater — especially if you need some supplies at Bed, Bath and Beyond afterwards.

“The Grapes of Wrath” began as a series of articles Steinbeck wrote for the San Francisco News in 1936. Prompted by the arid conditions of the Dust Bowl, hoards of Okies flooded into California, looking for work, mostly agricultural. But the lack of any legal protections for migrant workers exposed many to the worst kind of greed and avarice from growers. Steinbeck rode with the Okies, stayed in their camps and wrote vivid testimony about how generally awful life was for them. The effect of his powerful epistles, filtered through a lens of Socialist political philosophy that advocated unionization, provoked social change, much as Upton Sinclair’s The Jungle helped to change the horrid conditions in the meatpacking industry a generation earlier.

Ultimately, “The Grapes of Wrath” is a story of self-reliant people who just want to work, if only they could get around the heartless institutional powers that impede and exploit them. How ironic that, in recent times, the tide has reversed, with middle- and lower-class work seekers migrating out of California at twice the rate of those migrating in, while an ever-increasing number of those that remain gratefully turn to the institutions that once oppressed them to provide education, food, housing, etc.

Yet the play’s antiquated theme has the positive effect of adding to the audience’s sense of temporal displacement — the feeling that we are in a different time long past. The mood is first established as you make your way to your seat; some of the cast is already on stage, leading a hootenanny of Depression-era songs accompanied by guitar, jugs, spoons, etc., all dressed in the period costume of the “common folk.” Director Michael Michetti has wisely chosen to insert numerous other live musical interludes of old-timey music throughout the play as scene transitions and even as sound effects.

Settling in for Act One, we are treated to the saga of the Joad family as they make their way from the parched Dust Bowl of 1930s Oklahoma to the new promised land — California. Of course by Act Two, the group faces a series of nasty tribulations in their new environment, learning the hard-won lesson that so many newcomers to California have learned before and since — that beneath the seductive exterior of the Golden State lays a dark swamp of potential hardships, fraught with hazard and heartache.

Where the 1940 film with Henry Fonda centered on young Tom Joad (here played by Steve Coombs), this production, from an adaptation by Broadway vet Frank Galati, is more of an ensemble piece; and with strong performances coming from a number of different characters, this is a good thing. Gramma (Jill Hill) and Grampa (Gary Ballard) are over-the-top and funny, while Ma Joad (Deborah Strang) and Uncle John (Josh Clark) both turn in intense performances that feel true. The preacher (Matt Gottlieb) is also effective as a provider of philosophical commentary — almost like a one-man Greek chorus — until he becomes a martyr.

The simple set consists of three revolving wood slat “shacks,” while the actors use the entire theater, including the aisles and the back landings. The pacing is good, with a propulsive mix of gloom and merrymaking, as in the wonderfully choreographed square dance scene, which, not surprisingly, felt like a scene from a Broadway musical, and was a welcome counterpoint to all the oppressive goings-on. Bookended by symmetrical disasters (a Dust Bowl and a flood), the entire production is comprehensible, balanced and well crafted. The final scene, where the bereft Rose of Sharon, whose baby was stillborn, breastfeeds a starving wretch back to life has great power.

For all its period quaintness, “The Grapes of Wrath” is a compelling story that has withstood the test of time. A Noise Within’s production does the Pultizer Prize-winning novel justice with its toe-tapping, good-time vibe seasoned with menacing undertones. The elegance of the venue is the cherry on top.