The Heiress at the Pasadena Playhouse 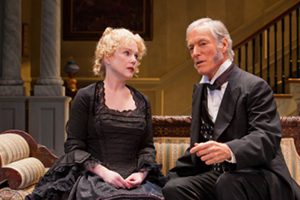 Julia Duffy and Richard Chamberlain in "The Heiress" at the Pasadena Playhouse. / Photo by Jim Cox

The Pasadena Playhouse should inherit a healthy box office with their current talented-cast revival of the surprisingly delightful “The Heiress.” Having not experienced past incarnations of writers Ruth and Augustus Goetz’s classic on film or stage, I was more than pleasantly surprised that this period drama, suggested by the Henry James novel “Washington Square,” was quite often interrupted by the audience’s laughter.

Especially entertaining were the many biting, dead-on barbs of stage and screen legend Richard Chamberlain as the well-respected family physician Dr. Austin Sloper. Chamberlain successfully mines the intended, yet unexpected laughs each time a pearl of wisdom rolls ever-so-trippingly out of his mouth.  Chamberlain dominates the stage with his authoritative voice and his commanding presence (making it quite easy to overlook some fumbled words, like “your daughter” instead of “my daughter”). His put-downs also seemed to be 21st-century digs in this 1850s period drama. For example, when Catherine models a wine-red-colored gown (her mother’s favorite color) for her father’s approval, Chamberlain’s rapier cuts with “Yes, but your mother dominated the color.” Bull’s-eye right between her eyes!

After the play’s introductory scenes between the doctor, his daughter and her aunt, the action (and the play) gets stimulated when guests arrive for a small dinner party. The doctor’s other sister Elizabeth (Gigi Bermingham) appears with her daughter Marian (Anneliese Van Der Pol), Marian’s fiancée Arthur (Chris Reinacher) and Arthur’s distant cousin, the uninvited Morris (Steve Coombs).

Obvious to all involved (both onstage and in the audience), Morris is attempting to woo Catherine. Coombs charms and seduces as the possibly conniving Morris.  This smooth and worldly Morris—Is he or isn’t he after Catherine just for her inheritance? Is Dr. Sloper just being an overprotective father, or does he really see through Morris’ charade of love for his daughter? Is Aunt Lavinia truly concerned about her niece’s lack of social wiles and companionship, or is she just scheming to prolong her gratis room and board at 16 Washington Square?

As both Chamberlain and Duffy play their respective characters, neither are villains or meddlers, as they could have been interpreted.  Both give their characters much heart and soul to be caring and sympathetic in their dealings with the poor, introverted Catherine.

Tom convincingly plays the naiveté and hurt of Catherine to almost annoying disbelief. One wants to shake her into reality and out of her tunnel vision of love. But Tom handles her changes of character from low, low self-esteem to attempts of standing up for herself quite believably.

Effective costuming by Leah Piehl and the proper posturing of the cast greatly suggest the 1850s. The stunning front parlor set of 16 Washington Square vividly created by set designer John Iacovelli, combined with Brian Gale’s dramatic side/back lighting of the large parlor windows which reveal the front courtyard at various times of day and night, make for a picture-perfect postcard of an 1850s luxury interior.

Dámaso Roderiguez directs this close-to-three-hour production with a firm hand and steady, even pacing — with never a dull moment to be had.

Quick prop changes between scenes were efficiently and cleverly performed by the maid and an unbilled butler, with Tobias’ maid providing in her scenes just the perfect amount of comic relief.