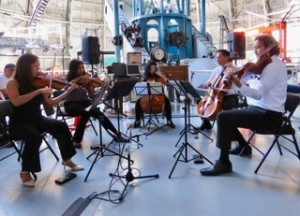 The Lyris Quartet with Cecilia Tsan (center) perform with the 100-inch telescope in the background at the Mt. Wilson Observatory / Photo by Henry Schlinger

Friends who don’t live in LA often ask me why I live here. I tell them: the mountains, ocean and desert. In addition to those things, I usually talk about the culture, in particular the classical music culture. When people talk about LaLa land, making reference to the celebrity scene and the fluff, they’re not wrong (Los Angeles magazine recently had a story on “drunk yoga.” Need I say more?). But I remind them of Caltech, JPL, USC, UCLA and, of course, the Mt. Wilson Observatory.

Now, combining the mountains with science and culture would make a phenomenal excursion, right? That is what the Mt. Wilson Observatory has done with their Sunday Afternoon Concerts in the Dome. As both a scientist and a musician, I especially appreciate this series.

The Mt. Wilson Observatory began its third season of music on May 5 and has hosted a concert each month since. Their most recent concert was Aug. 4, and it was a doozy. The well-known Lyris Quartet (Alyssa Park and Shalini Vijayan, violins, Luke Maurer, viola, Timothy Loo, cello) with cellist and series artistic director Cécilia Tsan performed the String Quintet in C Major D. 956 by Franz Schubert.

The Quintet is scored for string quartet with a second cello, which distinguishes it from the usual string quintets of Mozart, Beethoven and Brahms, among others, composed for string quartet with an extra viola. The second cello gives the Schubert quintet a richer and darker undercurrent. Schubert composed the quintet just two months before he died, along with piano sonatas and other works. Many of these are masterpieces, though some, like the quintet, had to wait for decades before they were published and performed.

One might think it odd to hear chamber music in a dome constructed for a 100-inch telescope that has been used to make earth-shattering discoveries about our universe. But the dome not only provided a unique acoustical venue in which the sounds of the instruments echoed for what seemed like an eternity, but its loftiness seemed appropriate for what violist Luke Maurer said about the Schubert: that it was not only one of the greatest masterpieces of the chamber music repertoire, but one of the three greatest pieces of music ever composed. (I forgot to ask him what the other two are.)

The venue is also wonderful for bringing the audience extremely up-close and personal with the musicians. Audience members in the front row were only a few feet from the musicians, which in the case of a quartet like the Lyris, was a real treat. The musicians, individually and collectively, gave a performance that was out of this world. They brought out the tenderness and turbulence that Schubert juxtaposed in the four movements and, when called for, imbued it with the urgency that Schubert must have felt, knowing that he was close to death when he composed it.

In lieu of an encore, which the audience would have demanded, the musicians performed a haunting arrangement of “Scarborough Fair” by Bill Reichenbach.

If you’d like to hear great music in a unique venue in the beautiful San Gabriel Mountains, check out the Mt. Wilson Sunday Afternoon Concerts in the Dome. The next concert is Sept. 1 and will include works by Mozart and Bach among others.