‘The Merchant of Venice’ at the Broad Stage 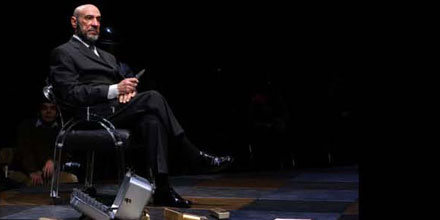 F. Murray Abraham stars as Shylock in "The Merchant of Venice" at the Broad Stage.

It is truly remarkable how the words of a 16th/17th-century playwright can still touch our hearts, make us laugh and stir intellectual debate. But that is exactly what Shakespearean theater does. It transcends time and never ceases to entertain and stimulate. At its best, the language even sounds contemporary from the mouths of the finest actors.

The Broad Stage delivers the best Shakespeare experiences in the most intimate and beautiful of theaters.  It has brought London’s Shakespeare’s Globe Theatre Company to Santa Monica, and now New York’s Theatre for a New Audience. Its production of “The Merchant of Venice,” first produced in 2007, was commissioned by the Royal Shakespeare Company and became the first production by an American company to be invited to the RSC’s Complete Works Festival.

While this play may not have as much star power as “God of Carnage,” currently onstage at the Ahmanson, it does have an Academy, Golden Globe, and Obie winner whom it is worth the price of admission alone to see: F. Murray Abraham.

Abraham is mesmerizing to watch. He plays Shylock with intensity and sensitivity, capturing the nuances, both tragic and comic, of one of Shakespeare’s most interesting characters. Charles Isherwood wrote in The New York Times, “Mr. Abraham’s Shylock is probably the finest I’ve seen.”

And he’s in outstanding company, with the likes of Kate MacCluggage as the complex, intelligent and fascinating Portia, and Jacob Ming-Trent as a hilarious pot-smoking, dreadlocked Launcelot Gobbo. There’s not a mediocre actor in the bunch, and all bring creative interpretations of their characters that waste not a single opportunity for humor in this tragicomedy.

Director Darko Tresnjak, whose outstanding artistic vision has been seen in recent LA Opera productions and in his work as the artistic director of San Diego’s Old Globe Shakespeare Festival from 2004 to 2009, brings an appropriately dark quality to the production. The minimal, technologically driven set design features three flat-screen TVs, three Apple laptops and metallic, slotted screens. The contemporary Wall Street setting fits so perfectly with the text it’s uncanny. Most importantly, Tresnjak’s compassionate interpretation of the story and all of the weighty issues it deals with — issues in the news even today — is as entertaining as it is thought-provoking.

The three final shows are this weekend. Visit www.thebroadstage.com/venice.