‘The Notebooks of Alexander Skryabin’ from Oxford University Press 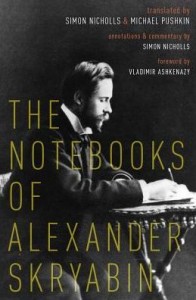 Alexander Scriabin’s music was, arguably, the catalyst that set in motion Sergei Rachmaninoff’s career as a touring pianist. Synthesizing elements from Chopin and Russian music with uniquely personal spiritual beliefs, his art captivated audiences, as well as fellow musicians.

Yet after his untimely death in 1915 at the age of 43, his music would come to be rebuked by many, including Igor Stravinsky and Dmitri Shostakovich. English musicologist Gerald Abraham dismissed him as a “sad pathological case,” while conductor Sir Adrian Boult refused to conduct what he called “evil music.”

“No one was more famous during their lifetime, and few were more quickly ignored after death,” wrote Faubion Bowers in his 1969 biography about the Russian composer.

For decades his music was kept alive by a core of true believers in Russia and, to a lesser extent, in the West. By the 1970s, his music re-emerged from the margins of the repertoire. Today Scriabin’s place in musical history is secure, garnering more attention and performances than ever.

However, it was only recently that the composer’s notebooks, which provide the key to understanding his inner life, were fully translated into English by Simon Nicholls and Michael Pushkin as The Notebooks of Alexander Skryabin, published by Oxford University Press.

Earlier this month, both scholars agreed to talk to Culture Spot LA about the importance of Scriabin’s writings.

Néstor Castiglione: Your book is the first integral publication in English of Alexander Scriabin’s writings. How long did your English translation take?

Simon Nicholls: It took us four years, during which time I was also pursuing a full-time teaching and performing career.

Michael Pushkin: Simon sent me his initial version one section at a time, and I responded with various linguistic or editorial suggestions. An extended email conversation would sometimes ensue. In addition, we went through the whole book twice face-to-face.

NC: Why did you feel that these writings merited wider awareness?

SN: The excerpts published by Faubion Bowers were tantalising. Scriabin’s later music has always seemed to me to be imbued with an urgent appeal or message. I felt that study of the writings in their complete state and in the original language would clarify that; also, the available excerpts hinted at an evolving structure of thought, which I felt study of the whole would illuminate. I wanted to penetrate Scriabin’s own imaginative world by following the path taken in his own study and reading. His music is so fascinating and beautiful, so speaking and compelling in an inscrutable way, that every scrap of background seems indispensable to approaching a fuller understanding of it.

NC: There is a sense that this book reclaims the Russianness of Scriabin’s art, highly cosmopolitan aesthetic and spiritual outlook notwithstanding. But it is a deeper and subtler one than the nationalist exotica of some of his elders.

SN: Scriabin’s large-scale works, his first three symphonies, have a breadth of horizon comparable to the Russian landscape, and the melodic lines of his early music have a Tchaikovskian sweep; the numerous jewelled and exquisite miniatures have been compared by Robert Craft to the work of Fabergé. His later harmonic style shows, in my opinion, clear affinities with aspects of Liszt filtered through Rimsky-Korsakov, Mussorgsky and, to a lesser extent, Alexander Dargomyzhsky.

NC: The high esteem in which Scriabin held his own writing appears to be reflected in his working on the text of the Mystery before the music itself.

SN: It is not quite true that Scriabin worked on the text of the Mystery (actually, the Preliminary Action) before the music. At his death the revision of the text was incomplete; though they may look fragmentary to us, he played extended, coherent excerpts to friends before he died. He was capable of carrying a complete composition in his head, and it was perhaps easier for him to play it than to “transcribe” it into notation.

NC: Posterity has been divided in its appreciation of the composer’s literary output. For example, a radio program from 1973 finds Bowers lavishly praising it, while Vladimir Ashkenazy on the same program counters that it is “not great.” Is knowledge of these writings crucial in order to better understand his music? Do you believe that it can stand on its own merit?

SN: Scriabin did take his literary effort very seriously, though it should be remembered that the notebooks were intended as private jottings. I think that an acquaintance with the writings and a willingness to accept them on their own terms are very helpful in increasing understanding. The perennial appeal of Scriabin’s music worldwide, though, shows that the texts are not essential to love it. Our interest in his writings depends on the interest of the music, as is the case with Wagner. While Scriabin’s verse is clearly related to the poetry of the senior poets among his contemporaries, especially Konstantin Balmont, it is not on their exalted level, despite a vivid sense of verbal music and some images that stick in the mind (for example, “born in the water I swim as a fish,” “in rainbow sparkling are the spiders’ webs”).

NC: The reader discovers that the often-luxurious expressive terms employed in Scriabin’s scores are echoes of his personal writings. For some performers his idiosyncratic indications can present a formidable challenge. Will the Notebooks present a similar one to readers, even to those attuned to Scriabin’s worldview?

SN: We are presented in the Notebooks with a developing mindset which is indeed very far from the typical contemporary one. They start, though, from a position understandable to modern readers: The loss of a fervent, sustaining faith, and the search for a way of coping with this loss. My introduction and biographical notes are intended to prepare the reader by showing links with the experience of Scriabin’s Russian contemporaries, and the section “The Growth of Scriabin’s Thought” gives the manifold sources of his thinking. It is hoped that, following that example and providing reliable complete texts with exegeses, the present publication will help to improve understanding.

NC: How do musicians of the present day, who tend to view performance in rational terms rather than in the poetic or spiritual ones that informed musicianship in the late 19th and early 20th centuries, meet Scriabin on his expressive terms?

SN: All performance directions are encoded messages, requiring knowledgeable interpretation. The explicit quality of Scriabin’s markings is specifically Symbolist: As a comparison, we might think of how in his Des pas sur la neige Debussy demands that the player evoke, in a two-note rhythm, the mood of a sad, frozen landscape.

While some of Scriabin’s markings are sheer hyperbole, a knowledge of his imaginative world certainly helps one to interpret its many ”calls” and “charms.” The fragmentary “story” implied in the numerous markings of the Sixth Piano Sonata recalls various scenarios in the composer’s notes, in particular parts of the early version of The Poem of Ecstasy known as Poème Orgiaque.

I would contend that while contemporary musicians are expected to read the score scrupulously and to have a rational approach regarding performing style and the background to the music, all this is worthless unless it serves as a springboard for the performer’s personal imagination. Yuja Wang, a superb interpreter of Scriabin, takes this further, saying that the key to his music’s interpretation is “self-forgetfulness.” Of course, such self-forgetfulness presupposes the firm basis of a deep knowledge of the score and the concepts behind it, allied to great technical command. The teaching of Heinrich Neuhaus assumed that the technical means would be found by the student, but he deployed a vast range of cultural reference, Russian and, very importantly, European, in order to stimulate a “subjective,” non-standard, imaginative identification with the music. It is hoped that this book will become an important part of such a frame of reference.

NC: While he was certainly envisioning something that would go beyond Wagner’s gesamtkunstwerk, Scriabin never precisely articulated his theory of a unity of the arts. Do you hold any personal theories as to how such a vision would have been realized? Have others approached or paralleled his ideas?

SN: I think that he wanted the elements — music, dance, etcetera — to combine so closely that they could hardly be distinguished one from another. Apparently, research has shown that a baby takes some time before it becomes able to distinguish the sources of sense perceptions. The Symbolist movement aimed at restoring this unity of perception, the idea being that through the parallels between the senses one arrives at a perception beyond all phenomena detectable by the senses.

A work comes to mind which owes nothing to Scriabin musically but certainly parallels his all-embracing vision: Stockhausen’s opera sequence Licht. The London National Theatre’s productions by Peter Hall of Aeschylus’ Oresteia and Euripides’ Bacchae with musical contributions from Harrison Birtwhistle, and the composer’s own dramatic experiments there with the combination of acting and improvised music, were examples of how music and words can work together to the enhancement of both, which are closely related to, though not influenced by Scriabin’s concept for the Preliminary Action.

MP: Scriabin’s interest in synesthesia fits with his generally integrative, unificatory approach. Such an integrative impulse was to be seen in the 1920s and beyond in the work of theater directors like Alexander Tairov with his “synthetic theatre,” of Vsevolod Meyerhold and others, and what has come to be known loosely as “total theatre.” The most directly contemporaneous analogy, though, might be with the director Edward Gordon Craig. Isadora Duncan introduced him in 1908 to Konstantin Stanislavsky, who then invited Craig to direct the 1912 Moscow Art Theatre production of Hamlet. Craig employed a set of mobile, neutral, folding screens. In practical terms, the screens aided scenic flexibility and scene-changes, but these non-representational screens have been said to have had symbolic functions too. In his book On the Art of the Theatre, published in 1911, Craig argues for the unification of all the crafts and techniques which together form theatrical art: Words, action, movement, rhythm, design and color were to combine creatively.

NC: Faubion Bowers’ advocacy has been very important in the reception of Scriabin’s music. Yet in recent times, Bowers’ books on the composer have come under scrutiny.

SN: Bowers has generally served as a reference in the past. It was not easy to obtain Russian sources, especially in the Soviet era. While he had access to many Russian sources, Bowers did not set out to write a scholarly work. No reference is given for any quotation, and the quotations themselves are not presented in accordance with academic standards. Bowers’ musical comments are clearly those of an enthusiastic amateur. … Bowers’ biography remains in print, and I’m sure it will continue to attract a popular readership.

NC: Would you say that this book serves as a corrective or update of Bowers?

SN: I wanted to provide the performer or music lover who wants to know the background and go deeper with an “Urtext” of the main sources, as far as that is possible in translation, and to enable them to check the references if they so desire. That is why I asked Michael Pushkin to help me with the translation: He is a professional academic in Russian language and cultural studies, and allied with his grasp of language and grammar is a sharp poetic ear. I hope that our combined efforts have produced a version which is accurate as regards meaning and does give an idea of the style of the original. Scriabin’s sophisticated and complex texts demand no less.